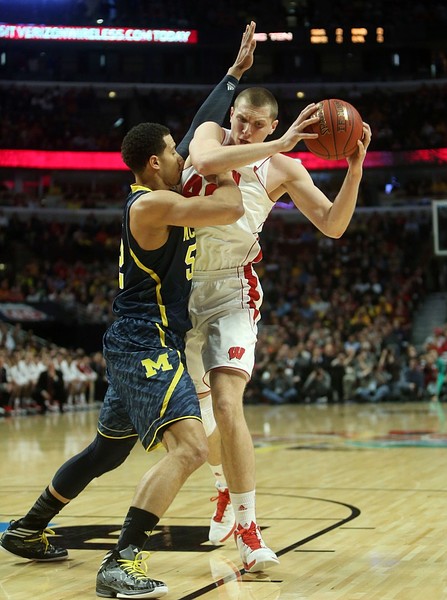 Ben Brust scored 11 of his 14 points in the second half and No. 22 Wisconsin knocked off sixth-ranked Michigan 68-59 in the second round of the Big Ten tournament on Friday. Traevon Jackson had 16 points for the Badgers (22-10), who will play top-seeded Indiana in the semifinals on Saturday. Ryan Evans added 12 points, six rebounds and six assist.

FINAL:  Wisconsin pulled out 68-59 win over Michigan on Friday at United Center in Chicago in the Big Ten Tourney.

A run lasting across the halftime break allowed Wisconsin (22-10) to grab the advantage. Down 16-6 with 6:19 to go in the first half, the Badgers broke out for a 23-8 run to take a five-point lead early in the second half.

Ben Brust sparked the Badgers with 14 points and 10 rebounds, and he made 4-of-6 three-pointers in the victory. Traevon Jackson nailed 4-of-7 shots from the field and scoring 16 points. Wisconsin shot just 39 percent from the field (22-of-57). The Badgers shot 8-of-21 from three-point range during the game, good for 38 percent. Wisconsin also got a double-digit game from Ryan Evans (12 points).

Tim Hardaway Jr. contributed 14 points, hauled in nine rebounds, and went 5-of-9 from the field for the Wolverines in the game. Michigan also got a double-digit performance from Trey Burke (19 points).

Jon Horford finished the run off with a field goal, which helped Michigan lead 20-17 at halftime. The Badgers won the free throw battle, shooting 76 percent (16-of-21) from the charity stripe, compared to 59 percent (10-of-17) for the Wolverines.

HALFTIME:  Michigan held No. 22 Wisconsin's offense to 17 percent shooting, helping the Wolverines to a 20-17 halftime advantage.

Through 20 minutes of action, a major weapon for the Badgers has been shut down, as Michigan has kept Jared Berggren in check. The senior enters halftime with two points, well below his season average of 11.5.

Traevon Jackson is leading Wisconsin. The sophomore has seven points. Tim Hardaway Jr. led the Wolverines in the first half, with four points and five rebounds.

Berggren answers the Michigan alley-oop with a jam.