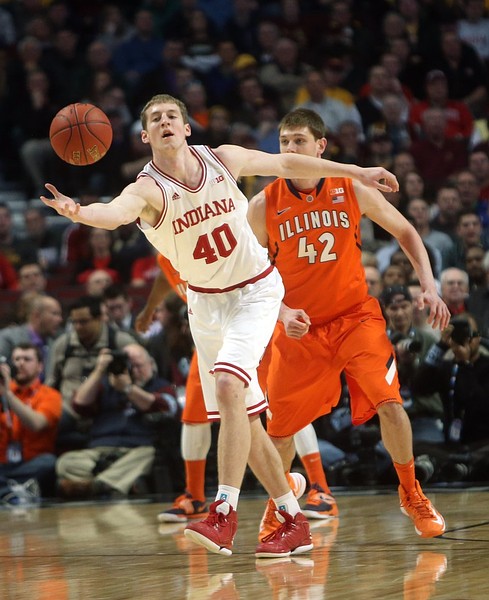 Cody Zeller scored 24 points and grabbed nine rebounds to lead No. 3 Indiana past Illinois 80-64 Friday in the Big Ten quarterfinals. The top-seeded Hoosiers (27-5) are off to a good start after claiming their first outright conference title in two decades and earning a first-round bye.

FINAL: Cody Zeller scored 24 points and grabbed nine rebounds to lift No. 3 Indiana to an 80-64 win over Illinois on Friday at United Center in Chicago in the Big Ten Tourney. Indiana (27-5) got solid performances from both Zeller and Victor Oladipo. Zeller shot 9-of-11 from the field. Oladipo had 12 points and pulled down 10 rebounds.

The Hoosiers hit 55 percent of their field goals (27-of-49). Indiana shot 21-of-24 from the free throw line. The Hoosiers also got double-digit games from Will Sheehey (11 points), Kevin Ferrell (12 points), and Christian Watford (15 points).

Tracy Abrams contributed 16 points and grabbed five rebounds for Illinois (22-12) in a losing effort. Joseph Bertrand shot 5-of-9 from the field and scored 10 points for the Fighting Illini. Illinois shot just 35 percent from the field (20-of-57). More Illinois scoring came from Brandon Paul (16 points).

Indiana won the rebounding battle en route to victory, pulling down 38 boards to 26 for the Fighting Illini. The Hoosiers never trailed in the game. Indiana's largest lead was 20, which came with 1:03 remaining.

HALFTIME:  Cody Zeller scored 14 points for Indiana in the first half to carry the Hoosiers to a 35-21 lead over Illinois. Indiana controlled the boards, outrebounding the Fighting Illini 26-10 in the first half

The Hoosiers built their lead by attacking the rim and getting to the foul line. Indiana shot 10-of-12 free throws in the first 20 minutes. The Hoosiers led by as many as 17 points in the first half and never trailed.

Trailing early in the game, Illinois went cold, going 2:14 without a point while Indiana went on a 7-0 run to open up an 10-2 lead.

The Hoosiers made 1-of-8 from beyond the arc in the first half while shooting 61 percent (11-of-18) on two-point shots. Indiana had 10 offensive rebounds in the first half, leading to second-chance opportunities.

Zeller steals it and sails down the court.

Richardson hits Egwu for the lay-up.

Ferrell drives & drops it to Zeller.

Griffey takes the back door to the open slam.

Oladipo breaks the press and dunks