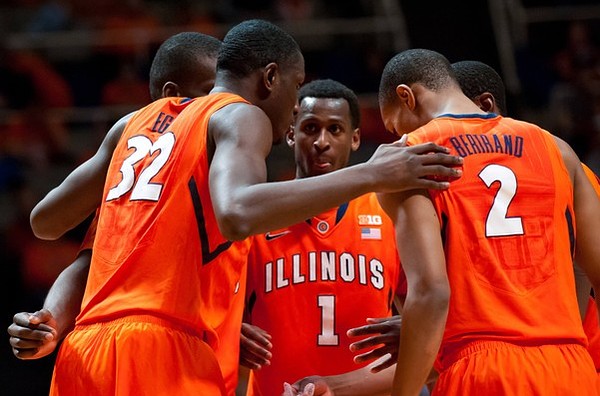 The tournament opener between Illinois and Minnesota didn't offer much in the way of aesthetically pleasing play, but a buzzer beater has a way of upping the entertainment value. The Gophers turned it over on a season-worst 35 percent of their possessions, allowing the Illini to stay in the game dispute big Minnesota advantages in every other category.

That set the stage for the finish, which included a wild five-shot Illinois possession that ended with a D.J. Richardson three to tie the game. The Gophers then struggled under the pressure, nearly turning it over twice before Austin Hollins stepped on the sideline, giving the Illini the final shot. John Groce chose not to call timeout, instead running a 1-4 isolation for Brandon Paul, who made a tough fading two at the horn.

Groce's iso call wasn't exactly rocket science, as Paul was the only player on his team having a good offensive game. Indeed, for a guy with some huge games in his past (Ohio State last year, Gonzaga this year), you could make an argument for this being his masterpiece. Paul scored 25 points on 16 shots, a total made more impressive by the game's sluggish 55 possession pace, and he did not turn the ball over once. On a day when the rest of his team struggled mightily, Paul absolutely carried them to victory.

Thanks to the cool SportVU tracking system installed at the United Center, we can tell you that Paul scored those 25 points on 70 touches, good for a very efficient 0.36 points per touch. That points per touch number was actually matched by Austin Hollins (16 points on 45 touches), but he was limited to 24 minutes thanks to Tubby Smith's decision to autobench him after two first half fouls. Hollins is an obvious candidate for bucking conventional autobench wisdom, as he averages just 2.5 fouls per 40 minutes. Instead, Tubby went conventional, and he sat Hollins and Trevor Mbakwe for much of the first half. In the second half, Hollins didn't foul at all, and Mbakwe picked up only one. Giving more minutes to those two players could have won this game for the Gophers. The autobench needs to die.

This win removes any doubt that may have still existed about Illinois getting into the tournament, and it puts Minnesota into a slightly precarious position should some crazy things conspire over the weekend. Most likely the Gophers are still in, but they can't be feeling good about the way they finished the season. Still, with the NCAA tournament comes new life, and the Gophers remain a team with the talent to make a run.

Michigan had some uncomfortable moments in the first half against Penn State, but ultimately the Wolverines ran away from the Nittany Lions with a 48 point second half. Still, amid all the highlight reel offensive plays from Michigan, serious concerns about its defense remain. Penn State is not a good offensive team, yet the Wolverines allowed 1.07 points per possession. Michigan has an offense that can blow away anybody, but the defense is simply not good enough to win games when things aren't going well on the offensive end.

Again, thanks to SportVU, we know that Mitch McGary and Glenn Robinson III both did a good job of getting themselves close to rebounds (14 chances apiece, defined as being within 3.5 feet of a rebound). McGary did an immensely better job of corralling those boards, as he grabbed 11 compared to Robinson's six. Also, props to the effort given by Penn State's D.J. Newbill, who covered the most distance of any player on the tournament's first day (2.8 miles).

Tim Miles continues to impress in his first season at Nebraska, as his Huskers knocked off a Purdue team that had been playing rather well. As usual, it was defense that carried the day for Nebraska, as the Boilers were held to 0.96 points per trip. Shavon Shields had a big game in his first Big Ten tournament, scoring 19 points on 12 shots. A.J. Hammons was effective when he got the ball (0.38 points per touch, according to SportVU), but he was limited to 29 touches in 26 minutes. Far too much of Purdue's offense went through ineffective perimeter players.

In a big upset, Andre Almeida avoided being the slowest player on the tournament's first day, as his 3.4 mph average eclipsed the 3.3 mph of Minnesota's Elliott Eliason. Hammons, Mbakwe, Andre Ingram, and Sam McLaurin all tied Almeida at 3.4 mph. Nebraska's massive center isn't as slow as you might think.

In the nightcap, Iowa rode a solid offensive output to a relatively easy win over Northwestern. As usual, Roy Devyn Marble led the charge, scoring 19 points on 12 shots. Melsahn Basabe was excellent on the glass, grabbing 80 percent of the rebounds in his area (12 of 15). Reggie Hearn certainly can't be faulted for his effort in his final collegiate game, as he covered a game-high 2.7 miles and scored 19 points. The former walk-on put together a heck of a career for a guy with no D1 scholarship offers.

Needless to say, this win does little for Iowa's tournament chances, other than simply not ending them. The big contest is tonight's matchup with Michigan State. If the Hawkeyes can win, they won't necessarily be a lock, but they'll at least be in the discussion. With the way most of Iowa's bubble competition has been playing lately, that might be enough. A loss would seemingly have the Hawkeyes NIT-bound.

If you're interested in these in-depth statistics we've been citing, be sure to pull up SportVU as you watch the rest of the tournament, and don't forget to follow us on Twitter (@bigtengeeks), where we've got thoughts from courtside all weekend.