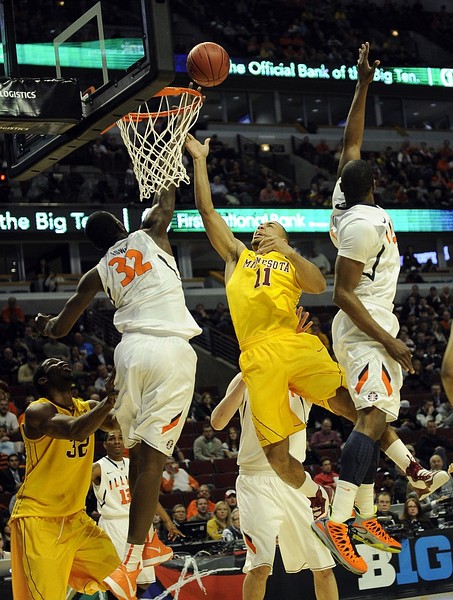 The Fighting Illini didn?t shoot well (32 percent) but forced 19 turnovers and had 21 points off of those turnovers. Early foul trouble for Minnesota big man Trevor Mbakwe helped Illinois, as the sixth-year senior had just eight points and played only 27 minutes. The Gophers have now lost three in a row but still appear to be a lock for the NCAA tourney.

Read more on this game:

Key moment: The final moment was the biggest, right? After Minnesota failed not once-but twice-to inbound the ball, finally resulting in a turnover, Illinois took possession. With the last few seconds dripping off the clock and the game tied, 49-49, Brandon Paul drained a long jumper as the clock expired. That overcame a nice effort by Minnesota guards Andre Hollins (13 points) and Austin Hollins (16) and a 38-26 rebounding edge for the Gophers, who shot 55 percent in the second half.

Key number: 6, turnovers for Illinois. Paul had none despite playing 36 minutes. He also had two steals and five rebounds. Basically, Paul had a ?S? on his chest, not letting Illinois wilt after it lost a 25-16 halftime lead.

What?s next: Illinois limped into this game, having lost three of its last four games. Now, the Illini have some mojo heading into a second-round game vs. No. 1 Indiana. And, in case you forgot, Illinois beat the Hoosiers earlier this season in Champaign, 74-72. Most experts think Illinois already has an NCAA bid sewn up; now, it?s all about improving its NCAA seed. And, the Illini have the experience and ability to make a run here in Chicago. Hang on. This could be a fun ride for Illinois.