Illinois stuns Minnesota at the buzzer 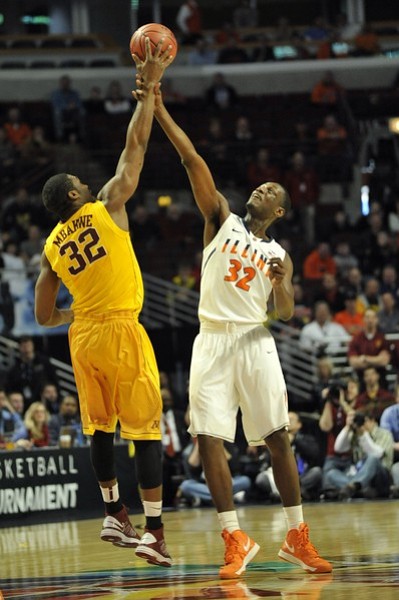 Brandon Paul scored 25 points and hit a fadeaway jumper at the buzzer to lead Illinois to a 51-49 victory over Minnesota in the first round of the Big Ten tournament on Thursday.watch the video of the shot in this post and listen to Gus Johnson and Shon Morris on the call.  Illinois (22-11) led by as much as 12 but was trailing by three when D.J. Richardson nailed a 3 with 47 seconds left to tie it at 49. That basket came after the Illini missed four shots on the possession. Find videos, photos and links in this post.

Also, BTN.com senior writer Tom Dienhart explains how Illinois pulled off this win. Follow him and other BTN contributors live from the tournament on BTN Connect. Catch up on all the action on our Big Ten scoreboard and get video, stats and recaps in this post.

Illinois probably was still in with a loss today, but they are a lock after that. Will play Indiana tomorrow with seeding in mind.

Great ending to otherwise pretty bad game. We all knew this would be a fun tourney.

FINAL: Brandon Paul scored 25 points and grabbed five rebounds to lift Illinois to a 51-49 win over Minnesota on Thursday at United Center in Chicago in the Big Ten Tourney.

The Fighting Illini struggled from the floor, shooting 32 percent (18-of-57).

Austin Hollins scored 16 points, corralled six rebounds, and went 4-of-5 from the field for the Golden Gophers in the loss. Minnesota shared the ball to the tune of 12 assists on 16 baskets. The Golden Gophers also got a double-digit effort from Andre Hollins (13 points).

HALFTIME: Illinois held Minnesota's offense to just six first-half field goals, and the Fighting Illini lead 25-16 at halftime. Trailing 7-2, Illinois used an 11-0 run to blow past the Golden Gophers and take a six-point lead. Seven Illinois players scored in the first half.

Minnesota applied the pressure in the first half, earning second-chance opportunities with nine offensive rebounds, to just three for the Fighting Illini. Illinois' Brandon Paul has 12 points and three rebounds. Joe Coleman is leading the Golden Gophers. The sophomore has four points, six rebounds, and three assists.

Bertrand drives baseline for the throw-down.

Mbakwe flips it up to tie the game