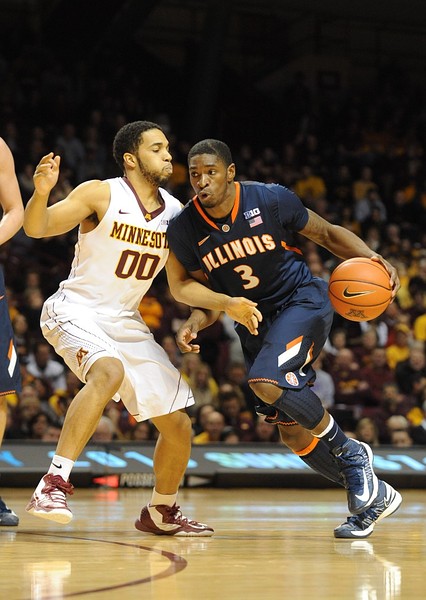 Most every mock bracket already has these teams in the NCAA tourney. So, what are they playing for in Chicago? Probably just NCAA seeding. No doubt, more was expected from each team entering the season. So, the tourney is a new beginning and chance for redemption for these veteran teams that each went 8-10 in Big Ten action. Don?t be shocked if either one makes an extended run. See highlights of the last time they played in this post. Thursday's game starts at noon ET and airs on BTN/BTN2Go.

The skinny on Illinois: The Fighting Illini don?t bring much juice to Chicago, their home away from home. Illinois has lost two in a row and three of four entering the Big Ten tourney. In fact, the Illini haven?t beaten a team with a winning overall record since topping Minnesota on Feb. 10. Guards Brandon Paul and D.J. Richardson need to hit their shots. If they do, Illinois is a difficult team to beat. And Minnesota is the worst Big Ten team defending the three.

Key number: 415, three-pointers attempted by Illinois, the most in the Big Ten in conference play. But the Illini?s 29.4 percent success rate is 11th in the league.

The skinny on Minnesota: The Gophers have been a beacon of maddening inconsistency all season, not showing much improvement as the season has progressed. They have gone 2-4 in their last six games coming to Chicago. At one point this year, Minnesota was No. 8 in the nation and 15-1. Turnovers have been killer, along with poor shooting that at times has paralyzed the offense. Andre Hollins came alive in the Big Ten tourney last season. Can he do so again? This team is still searching for a go-to man. Without a doubt, Trevor Mbakwe must have a big game vs. an Illini team that lacks much muscled inside.

Key number: Minus 2.7, Minnesota?s turnover margin, which is last in the Big Ten in league games.

This season: The teams split the season series, with each winning on the other?s home court. The Golden Gophers prevailed in Champaign, 84-67, on Jan. 9. Illinois won at Minnesota, 57-53, on Feb. 10.

What?s next: The winner will advance to face No. 1 Indiana, a team that both Illinois and Minnesota have beaten this season when the Hoosiers were ranked No. 1 in the nation.