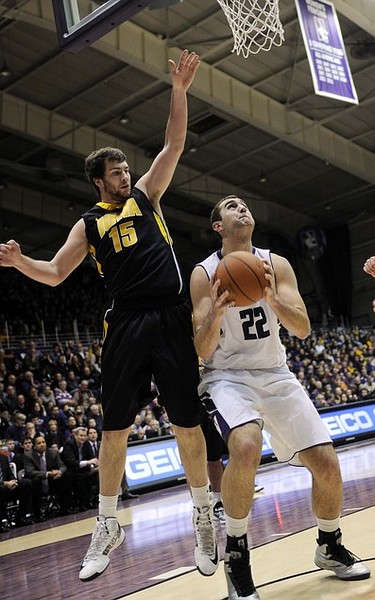 Iowa is the school seemingly with the most on the line in the Big Ten tourney, as it is the lone Big Ten team on the bubble. Many seem to think the Hawkeyes need to win just two games to get an at-large berth. Meanwhile for Northwestern, speculation swirls about the job status of Bill Carmody. Could this be the last game he coaches for the Wildcats? Watch the highlight from their last meeting in this post. Thursday's game starts at approximately 9 p.m. ET

The skinny on Iowa: The Hawkeyes figure to get a lift from the return of guard Mike Gesell, who has missed the last four games with a foot injury. This is a young and exciting Iowa team that arrives in Chicago having won six of its last eight games. Roy Devyn Marble recently became a 1,000-point scorer. He?s just one of several weapons on this Hawkeye team that likes to run and has improved defensively.

Key number: 683, offensive rebounds for Iowa, the most in the Big Ten in league play.

The skinny on Northwestern: The Wildcats bring an eight-game losing skid to the Big Ten tourney, not winning since Feb. 2 vs. Purdue. And every loss has been by at least 10 points. The season went south after Drew Crawford and then Jared Swopshire suffered season-ending injuries. Reggie Hearn and Dave Sobolewski are solid weapons, but they can?t carry this team.

Key number: 55.7, points per game for NU in league action. That?s the fewest in the league.

This season: Iowa won both meetings vs. Northwestern this season, taking a 70-50 decision in Evanston and a 71-57 win in Iowa City.

What?s next: The winner will meet No. 3 Michigan State on the last game of Friday. It?s interesting to note that the Spartans eliminated Iowa from last year?s Big Ten tourney.