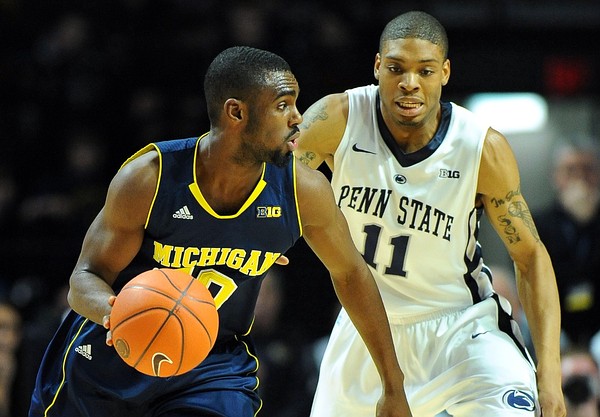 How cruel and tough is the Big Ten? When Jordan Morgan?s last-second put back rimmed out against Indiana on Sunday and Michigan lost to the Hoosiers, the Wolverines went from being co-Big Ten champs to being the No. 5 seed in this tourney and having to play an opening-round game. Penn State has no fear of Michigan, beating the Wolverines once and almost knocking them off another. See highlights of the last time they played in this post.

The skinny on Michigan: The Wolverines come to Chicago on wobbly legs, going 2-2 in their last four games. Remember, this was the No. 1 team in the nation at one point. No doubt, Michigan is maybe the most gifted offensive team in the nation with players like Trey Burke, Tim Hardaway, Jr., and Glenn Robinson III, among others. But questions persist about the inside play, defense and toughness.

Key number: Plus 2.9, Michigan?s turnover margin, which ranks first in the league in Big Ten play. No team is more careful with the ball than the Wolverines, whose 9.1 turnovers per game are the fewest in the Big Ten.

The skinny on Penn State: This is a scrappy team that always plays hard and has continued to improve. That?s a testament to Pat Chambers. There never was any sulking after Tim Frazier was lost early in the season to an Achilles injury. Players like D.J. Newbill and Jermaine Marshall have emerged for a tough team.

Key number: 68.9, points allowed per game in Big Ten action by Penn State. That?s the highest amount in the conference, a big reason why success has been fleeting during this challenging season.

What?s next: The winner will advance to play No. 4 Wisconsin. Neither Michigan (0-1) nor Penn State (0-2) beat the Badgers this season. The Wolverines dropped a 65-62 overtime thriller in Madison on Feb. 9. The Nittany Lions lost the regular-season finale at home to Wisconsin, 63-60, on a last-second three-pointer.