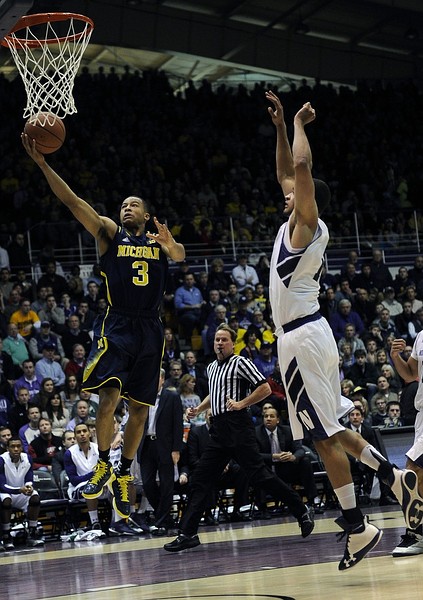 Last night was awards night in the Big Ten, and all eyes were on who would win player of the year honors. Let?s start daily links there. The famous race debated for weeks was between Michigan?s Trey Burke and Indiana?s Victor Oladipo. In the end, the voters got it right in tabbing the Wolverines sophomore guard.

As Nick Baumgardner of MLive.com points out, Burke made the spectacular look routine. He made amazing look normal. He made consistency look easy. By almost every measure possible, Burke was the Big Ten's best player this season — and it really wasn't close. Check out the numbers. Burke was second in the Big Ten in scoring average at 19.2 points per night.

In conference games, he led the league at 20.2 points per tilt. Oladipo, meanwhile, was 11th in scoring at 13.7 per game. Burke won the Big Ten regular-season assist title by a margin of 78, his assist-turnover ratio is fourth nationally at an absurd 3.5. This should clear up any questions folks have about Burke?s legitimacy as the Big Ten?s best player.

If you are scoring in Columbus, that?s eight years in a row that Ohio State has had a first-team All-Big Ten player.

Deshaun Thomas and Aaron Craft earned the honor this season, Thomas being tabbed to both the coaches and media team and Craft being chosen for the coaches team. Terence Dials started the trend in 2006 and has been followed by Greg Oden and Mike Conley in 2007; Jamar Butler in 2008; Evan Turner in 2009 and 2010; Jared Sullinger in 2011 and 2012. No other Big Ten team has a streak longer than a year. Impressive.

The Des Moines Register says Iowa coach Fran McCaffery ranks near the bottom of pay among Big Ten coaches with a salary of $1.3 million. Michigan State?s Tom Izzo leads the way with a $3.49 million salary. The guy does have six Final Four and a national title on his resume, after all.

The great Mike Hlas of the Cedar Rapids Gazette thinks Iowa is probably just a big upset in the Big Ten tourney from securing a bid to the NCAA tourney.

I?m not so sure. But the No. 6 seed Hawkeyes can secure an automatic Big Dance bid by winning the Big Ten tourney. A long shot? Sure. But Iowa did it as a No. 6 seed in 2001, when the Big Ten tourney also was held in the United Center. Hmmmm. Iowa?s cause in Chicago will be helped by the expected return of freshman guard Mike Gesell, who has been out the last four games with a right foot injury.

Minnesota coach Tubby Smith thinks his Gophers may be better at tournament play because ?you just go in and play.?

You know, there?s no time to think; just react and play game after game. There may be something to that, as Minnesota enjoyed an extended run in the NIT last season and has done well during in-season tourneys of late. The Gophers better hope Smith is correct, as the regular season certainly didn?t go as planned with an 8-10 Big Ten record.

Lee Barfknecht of the Omaha World-Herald has his weekly Big Ten ratings. No big surprises, but still always worth a look.

Remember that dust up between Indiana coach Tom Crean and Michigan assistant Jeff Meyer after the Indiana at Michigan game on Sunday? Sure you do. Well, Crean apologized.

To recap, Crean said to Meyer-an assist at Indiana under Kelvin Sampson, whose regime led to the demise of the Hoosier program-?You know what you did! You helped wreck the program! You helped wreck our program!?

By the way, Meyer was cleared of any wrong-doing by the NCAA for his time working at Indiana. Another thought: If Crean didn?t want to clean up the mess left by Sampson, then why did he take the job? Didn?t Crean know what he was getting in to? Is it the fault of Sampson or Meyer that Crean took the IU job?

Crean?s apology: ?We discussed a couple things, I apologized for that, and in retrospect, wished I never would?ve addressed anything after the heat of battle in a game. But we move on.?

In case you missed it, Illinois fans, Bruce Weber was named Big 12 Coach of the Year. Let?s file this under: ?What a difference a year makes.?

Bob Flounders of the Harrisburg Patriot-News begins a nice position-by-position analysis of Penn State as spring football approaches with a look at the quarterbacks.

No doubt, this is the most critical area of Bill O?Brien?s second team. But nothing figures to be decided until Christian Hackenberg arrives in the summer.

One area that isn?t loaded with unknowns is running back, where Penn State has a lot of quality commodities.

Speaking of spring quarterback battles, Purdue will have an interesting one.

There?s veteran Rob Henry, along with redshirt freshmen Austin Appleby and Bilal Marshall and true freshman Danny Etling, who is on campus. This is going to be fascinating to watch play out and a big first step in the Darrell Hazell era.

Interesting read here in a story written by Matt McGloin-yes, THAT Matt McGloin-who says he plays with a chip on his shoulder. I would suggest that he continues to do so. It worked fabulously last season!

ALSO, they have GOT to go away from this "coaches vs. media" crap — just have one team for God's sake!

My take: This idea has merit. I always felt the media team has more credibility. More objectivity. Fewer agendas.

My take: This should make you feel old.

Disagree with those ripping Zags. That team would contend in Big Ten. Maybe not win, but contend. And yes, I know Illinois won in Spokane.

Gary Harris is the Big Ten freshman of the year. He's the first MSU player to win the award

My take: This is a bit of a shock when you consider the quality of recruits Tom Izzo has brought to East Lansing.

My take: The guy came on like few others this season. Amazing finish.

My take: Hill may be short, but I love his motor. He?s a player who will make it.

Did IU's Tom Crean deserve Big Ten coach of year? Absolutely. You can argue he also should have won it last year.

My take: I agree. It?s difficult to deliver big expectations, as opposed to surprising skeptics with a good season when great things aren?t expected.

Further evidence of how special the state of Indiana '12 class was, 4 of 5 players on Big Ten All-Frosh Team were from indiana

My take: And one Indiana native who didn?t make it was Michigan?s Mitch McGary. Another was Purdue?s Ronnie Johnson. So, if you aren?t recruiting the Hoosier State, I suggest you start, Mr. Basketball Coach.