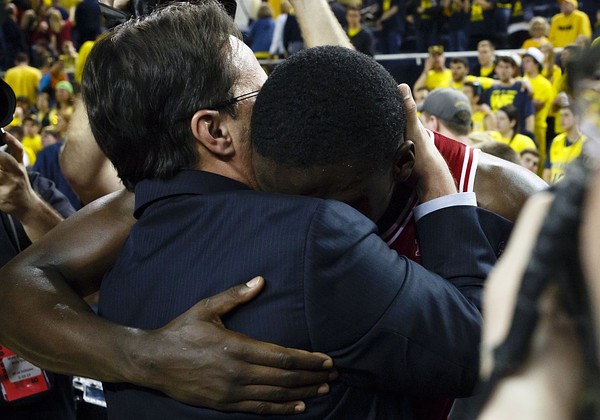 Hat?s off to Indiana for showing moxy and toughness-yes, toughness-in winning at Michigan, 72-71, to clinch the program?s first outright Big Ten championship since 1992-93. Indiana was down by five points with 52 seconds left. That?s when Cody Zeller went to work-and Michigan bricked some key field goals to blow the game. Daily links has to start from Ann Arbor, which is still pulsating.

For Michigan, this loss is going to sting for a while. Point guard Trey Burke summed the Wolverines? late-game collapse thusly: ?It didn?t just fall our way.? That about sums it up perfectly.

[BIG TEN TOURNEY: Get the full bracket with game times and TV info.]

It?s amazing what 52 seconds of poor basketball can do to a team. It caused Detroit Free Press columnist Drew Sharp to wonder how good this Michigan team really is. The Wolverines? toughness-sound familiar, Indiana?-has been questioned–again.

Adding spice to this game-as if it needed more spice-was this postgame exchange between Hoosiers coach Tom Crean and Michigan assistant Jeff Meyer. Meyer was an Indiana assistant under Kelvin Sampson. And Crean apparently said to him: ?You helped wreck that program.? Today, Crean apologized for the incident.

"The one thing I want to get out of the way, because I don't want it to take away from the game at all is a professional misunderstanding I had with coach Jeff Meyer after the game," Crean told reporters. "Later that night, on the way to the plane actually, I talked to him on the telephone. We discussed a couple things, I apologized for that.

Here is the reaction from Indianapolis Star writer Terry Hutchens on that incident and other things from this instant classic game. Oh, and this win had to wrap up the No. 1 overall seed in the NCAA tourney for Indiana, right? Sure it did.

In case you haven?t noticed, Ohio State?s Thad Matta has done a heck of a coaching job this season. Heck, it may be his best job yet.

How good? I think he deserves mention as Big Ten coach of the year. (IU?s Tom Crean likely will get the honor, however.) Matta had the Buckeyes poised to win a share of a fourth league title in a row, doing so without Jared Sullinger and William Buford on what essentially was a two-man team (Deshaun Thomas and Aaron Craft). Michigan?s loss prevented that from happening. Still, Matta may have the hottest team going into the Big Ten tournament.

As the Big Ten tournament dawns, Minnesota is still searching for its go-to guy. This isn?t good.

Last year, Andre Hollins emerged as that guy in the Big Ten tourney. Who will it be this year? My money is on Trevor Mbakwe. And, if it isn?t the burly big man, then the Gophers will be in for a short stay in Chicago.

First it was Ben Brust making that crazy shot just over half court to tie Michigan earlier this season and force overtime. Now, we have Traevon Jackson hitting an NBA-range three-pointer to propel Wisconsin to a win at Penn State.

The win helped the Badgers earn the No. 4 seed in the Big Ten tourney and a first-round bye. But perhaps more importantly, it also gives Wisconsin some needed mojo coming to Chicago.

Michigan State coach Tom Izzo is stunned by the depth of talent that will be on display at the Big Ten tourney. To wit: No. 7 ranked Michigan will be the No. 5 seed in the event.

Speaking of Izzo, you have to check out his stirring talk after the game. He brings the Senior Day crowd to its feet. Amazing stuff.

What does Iowa have to do make the NCAA tourney? It?s a vexing question.

Pat Harty of HawkCentral.com thinks two wins in the Big Ten tourney will be enough for the Hawkeyes-9-9 in the Big Ten–to make the Big Dance for the first time since 2006. Really? I?m not so sure. Who exactly has Iowa beaten? Its best wins? At home vs. Iowa State, Wisconsin, Minnesota and Illinois. That?s it. The Hawkeyes play Northwestern in the opening road; win that, and there?s a game vs. Michigan State.

Loren Tate of the Champaign News Gazette lays it out for the future of Illinois basketball: The Illini need talent.

To that end, the state is loaded with some top talent in the junior class-and Illinois needs to grab some of it. Alas, the top catch-Jabari Parker-is headed to Duke. But Cliff Alexander, Jahlil Okafor and Paul White are some other top talents up for grabs. Get after it, John Groce!

No, your eyes aren?t deceiving you: Those are Iowa Hawkeye billboards in Minneapolis.

This comes on top of news that Iowa will have a spring practice in Des Moines, Iowa, and you can see that Iowa is making efforts to firm up its territory, particularly in the wake of the rise of Iowa State and the loss of some key recruiting battles in the Des Moines area.

It?s no secret: The defensive line is a concern at Nebraska, as the Cornhuskers dig deeper into spring drills.

Heck, who are we kidding: The entire Nebraska defense is under scrutiny this spring. This is a unit that wasn?t just beaten on occasion in 2012; it was absolutely shredded. Wisconsin ran for 539 yards and scored 70 points vs. Nebraska in the Big Ten title game. UCLA notched 653 yards of total offense and ran 94 plays. Keep an eye on tackles Kevin Williams, Aaron Curry and Vincent Valentine. And JC end Randy Gregory is an intriguing guy who could be a pass-rushing force.

Oladipo reminds me of one of my favorite players of all time. Bruce Dalrymple. #ramblingwreck

My take: Wow. This is an obtuse reference.

My take: When teams are this good and this evenly matched, yes.

MSU's Derrick Nix on his Feb. 14 comments ?My comments cost us the Big Ten title. It affected us a lot. They did. That?s all I?m gonna say."

My take: I don?t know if they cost MSU the Big Ten title, but they sure weren?t timely. I appreciate Nix?s frankness, however.

My take: That?s called ?stepping up.?

My take: No doubt! I?ll wear my hard hat.

Boy. It's like the #Gophers are the ONLY #B1G team not to be competitive in the final weekend.

My take: I?m nodding my head.

So most likely Iowa-Michigan State in Big Ten quarters next Friday. Spartans have KO'd Iowa out of last two B1G tourneys.

My take: Is this foreshadowing?