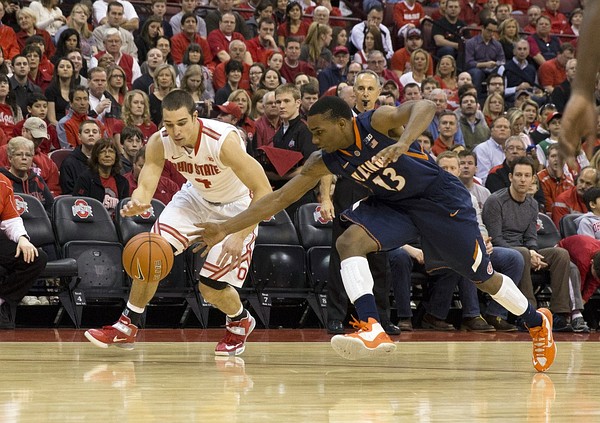 Deshaun Thomas, playing perhaps his final home game for No. 14 Ohio State, scored 19 points Sunday to lead the Buckeyes to a 68-55 victory over Illinois, keeping alive their hopes of a Big Ten title tie. The victory put Ohio State (23-7, 13-5) in position to grab a share of the Big Ten title if No. 7 Michigan can win at home against No. 2 Indiana later on Sunday.

The Buckeyes are assured the No. 2 seed in next week's Big Ten tournament at Chicago's United Center.

FINAL: Aaron Craft scored 14 points, grabbed four rebounds and dished out six assists and Deshaun Thomas added 19 points and four boards to lead No. 14 Ohio State to a 68-55 victory over Illinois on Sunday at Value City Arena. A run lasting across the halftime break allowed the Buckeyes to grab the advantage. Down 20-18 with 6:50 to go in the first half, Ohio State broke out for a 17-4 run to take an 11-point lead with 19:38 in the game. The Buckeyes went 18-of-25 from the charity stripe as a team (72 percent) and secured 16 offensive boards. Brandon Paul had 21 points and hauled in five rebounds for Illinois (21-11), which shot just 35 percent from the field (19-of-54). Ohio State outrebounded the Fighting Illini 44-28. The Buckeyes have now won five straight games with the victory.

HALFTIME: Illinois led No. 14 Ohio State late in the first half, but allowed the Buckeyes to use a 15-4 run to take a 33-24 lead into halftime. Neither team has been able to take control of the game thus far, as there were nine lead changes in the first half. Illinois led 22-21 when Ohio State went on a 9-0 run to take an eight-point lead. Aaron Craft, Lenzelle Smith, Jr. and Deshaun Thomas all scored seven points to pace the Buckeyes, who shot 50 percent. Brandon Paul and D.J. Richardson also scored seven points apiece to pace the Illini.