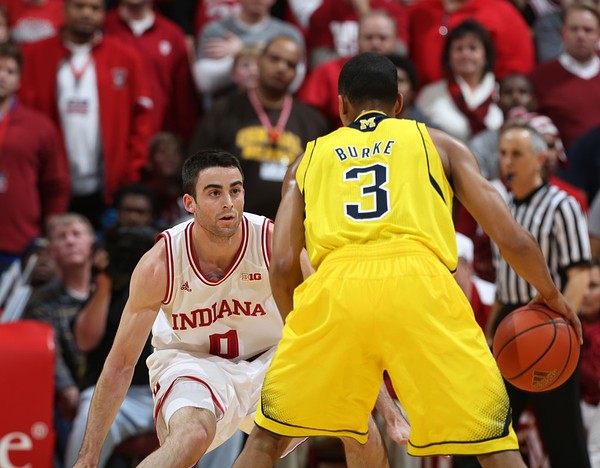 The Big Ten will put on bow on the regular season this weekend, capping what has been a wild and wondrous ride during a season that has seen Indiana and Michigan each hold the No. 1 ranking at some point. And Ohio State, Michigan State, Wisconsin, Illinois and Minnesota all have been ranked in the top 10 at various points this season.

This weekend could add to the wild and wooliness. In fact, by the time the sun sets on Sunday, there may be a four-way tie for first place in the Big Ten between Indiana, Michigan, Michigan State and Ohio State.

1. Ohio State. The Buckeyes are rolling, having won four in a row and five of six. The big win, of course, was the victory at Indiana on Tuesday. That victory opened the door for the Buckeyes, Michigan and Michigan State all to earn a share of the Big Ten championship. They all owe the Buckeyes a ?thank you.? Thank you.
2. Michigan. The Wolverines have won four of their last five games. The lone loss? That stunner at Penn State last week vs. a Nittany Lions squad that was winless in the Big Ten. (I still can?t believe it.) Nonetheless, Michigan is a win over Indiana on Sunday from netting a share of a second consecutive Big Ten title.
3. Michigan State. The Spartans extinguished a three-game losing streak with an ugly-an I mean ugly-win over Wisconsin last night. Now, the Spartans have a shot to win at least a share of a fourth Big Ten crown in the last five seasons.

1. Indiana. This is the time of year when teams are supposed to be peaking. Well, Indiana isn?t. In fact, it?s enduring its worst funk of the season with losses in two out of the last three games. The Hoosiers? toughness has been called into question during losses at Minnesota and at home to Ohio State.
2. Minnesota. This is the Big Ten?s most maddening team, displaying bouts of brilliance (home win over Indiana) and ineptness (loss at Nebraska) all in a 10-day window. It?s amazing, really. This team probably has taken 20 years off of Tubby Smith?s life-while diminishing the life expectancy of Golden Gophers fans, too. The NCAA tourney ride could be very short-or surprisingly long. Who knows?
3. Wisconsin. The 58-43 loss at Michigan State last night was the latest clunker. The Badgers have lost two in a row and are 3-3 in the last six games. Playing great defense and limiting turnovers are great. But you have to score to win. And this team struggles to put the ball in the bucket, relying too much on outside shots.

1. Trey Burke is the best player in the Big Ten. There, I said it. No, it doesn?t matter what happens on Sunday when Michigan plays host Indiana. I already think the sensational Wolverine point guard has the honor wrapped up over Indiana?s Victor Oladipo. And by the way: Burke will excel on Sunday. Bank on it.
2. Ohio State?s Thad Matta deserves merit as Big Ten coach of the year. I thought Indiana?s Tom Crean had this honor sewn up. Now, I?m not so sure. If the Hoosiers lose on Sunday at Michigan and the Buckeyes beat Illinois to earn a share of a fourth Big Ten title in a row, I think Matta may deserve the award. Heck, who am I kidding? Give it to Matta.
3. If Indiana can?t get out and run in transition, it struggles. The Hoosiers struggle if they have to execute in half-court sets. And if you bang them around, Indiana will flinch. This isn?t a physical team. And how tough is Indiana? Slow down the game and bang the Hoosiers.

1. Ohio State 67, Indiana 58. The Buckeyes dumped the No. 2 Hoosiers on Senior Night in Bloomington, getting big efforts from their supporting cast. Shannon Scott, Evan Ravenel and LaQuinton Ross all played vital roles off the bench as complements to Deshaun Thomas (18 points) and Aaron Craft (15). The win prevented Indiana from grabbing its first outright Big Ten championship since 1993.
2. Michigan 80, Purdue 75. The No. 7 Wolverines showed some grit in fighting through a 12-point second-half deficit to win a game Michigan had to have. Trey Burke was out of sorts in the first half but finished with 26 points, seven assists and five rebounds. He apparently was motivated by some trash-talking Boilermakers. Never poke a bear, Purdue.
3. Michigan State 58, Wisconsin 43. This was an elimination game for the Big Ten title. And the Spartans delivered behind Keith Appling?s 19 points. Yes, Appling finally had a big game. The win also stopped the bleeding of a three-game losing skid for Michigan State and gave it some needed mojo heading into tourney time.

1. Indiana at Michigan, Sunday. Does it get any better than this? Of course not. This is it: The Hoosiers? last shot to win that elusive outright Big Ten championship. It also is a showdown between Trey Burke and Victor Oladipo, the two best players in the Big Ten. By the way: The Wolverines are the lone Big Ten team that?s unbeaten at home: 17-0.
2. Illinois at Ohio State, Sunday. Sure, the Buckeyes have revenge on their mind after getting clubbed, 74-55, in Champaign on Jan. 5. But they also have their sights on winning a share of a fourth league title in a row with a victory over the Illini. And that will be what?s on the line if Indiana losses at Michigan on Sunday, too.
3. Northwestern at Michigan State, Sunday. The Spartans need to win-and to have Indiana lose at Michigan-to sew up a share of the Big Ten championship. The Spartans could be a very dangerous team later in March, especially if Keith Appling plays like he did vs. Wisconsin.