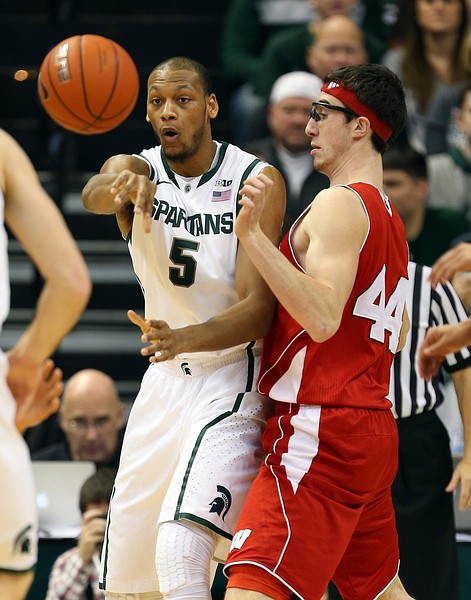 Keith Appling scored 14 of his 19 points in the second half to help No. 10 Michigan State pull away to beat No. 22 Wisconsin 58-43 on Thursday night and stay in the Big Ten race. The Spartans (23-7, 12-5) moved into a three-way tie for second with Michigan and Ohio State. The trio trails conference-leading Indiana with one game left in the regular season.

FINAL:  No. 10 Michigan State used stingy defense to defeat No. 22 Wisconsin 58-43 on Thursday at the Jack Breslin Student Events Center in East Lansing. Michigan State (23-7) held Wisconsin (20-10) to 28 percent shooting from the field. Keith Appling carried the offensive load for the Spartans, finishing with 19 points, five rebounds, and 7-of-13 shooting from the field.

Michigan State shot just 37 percent from the field (24-of-65). The Spartans also got a solid contribution from Gary Harris (11 points). Ryan Evans had nine points and yanked down 11 rebounds for the Badgers in a losing effort. Wisconsin got double-digit efforts from Ben Brust (10 points).

HALFTIME:  No. 10 Michigan State leads 25-18 at halftime after locking down No. 22 Wisconsin's offense, holding the Badgers to 32 percent shooting and just seven field goals. Trailing 12-10, the Spartans used a 10-0 run to pull ahead of Wisconsin and take an eight-point lead. Through 20 minutes of action, a major weapon for Michigan State has been shut down, as the Badgers have kept Gary Harris in check. The freshman averages 13.3 points a game but has yet to score tonight. Seven other Michigan State players scored in the first half. Travis Trice led the way for the Spartans in the first half, with three points. Wisconsin's Ryan Evans already has six points and five rebounds.