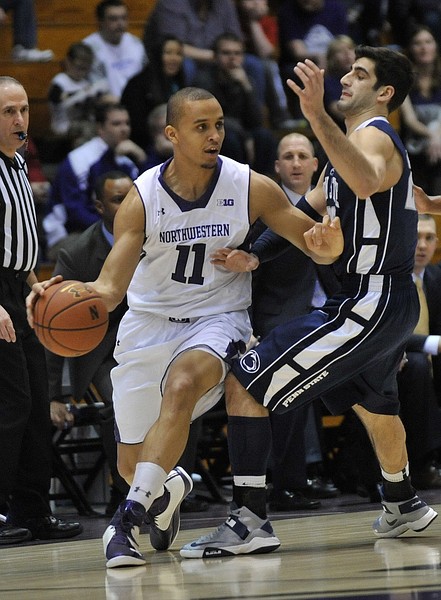 Jermaine Marshall and D.J. Newbill each scored 18 points to lead Penn State to a 66-59 victory over Northwestern on Thursday night. Penn State (10-19, 2-15 Big Ten), last in the 12-team conference, scored the game's first 12 points, withstood a Northwestern surge, then pulled away in the second half. The Nittany Lions' only other conference win was at home against No. 7 Michigan on Feb. 27.

The Wildcats struggled from the floor, shooting 35 percent (17-of-48). More Northwestern scoring came from Reggie Hearn (11 points). Penn State won the battle on the boards as well as the game, as it outrebounded Northwestern 41-25. The loss extends the Wildcats' losing streak to seven games.

HALFTIME: The Nittany Lions made seven of 11 free throws and jumped out to 12-0 lead with 15:20 left in the first half.

Northwestern moved the ball in the first half, accounting for seven assists on eight field goals. Seven Northwestern players have scored. The Nittany Lions fired often and fired with accuracy from distance, hitting 50 percent (5-of-10) of their three-point attempts. Penn State has eight offensive rebounds to Northwestern's three. Northwestern's Reggie Hearn has six points and three rebounds. Jermaine Marshall has 13 points for Penn State.