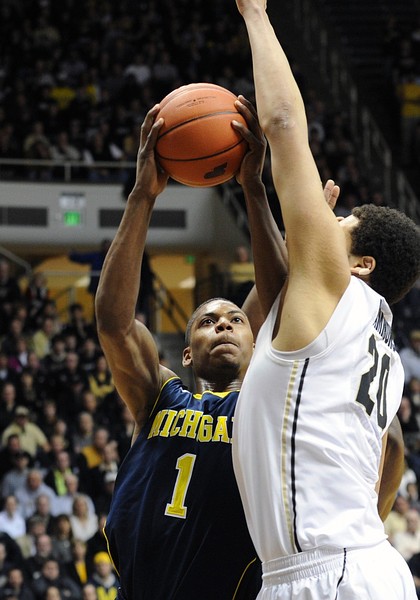 Trey Burke had 26 points and five rebounds to lead No. 7 Michigan's rally to an 80-75 victory over Purdue on Wednesday night. Terone Johnson scored a career-high 35 points and Rapheal Davis added 15 for Purdue (14-16 7-10 Big Ten), who have lost five of their last seven games.

Nik Stauskas had 17 points and Tim Hardaway, Jr. had 16 points and five rebounds for the Wolverines (25-5, 12-5), who have won four of their last five games and remain in the race for a share of the Big Ten title.

Sandi Marcuis throws it down:

FINAL: Terone Johnson scored 32 points and grabbed seven rebounds for Purdue, but it was not enough as No. 7 Michigan rallied past Purdue, 80-75, Wednesday at Mackey Arena in West Lafayette. Nik Stauskas' free throw with 3:04 to go gave Michigan (25-5) the late lead. Trey Burke sparked the Wolverines, as he scored 26 points, hauled in five rebounds, and dished out seven assists in the win. Michigan shot 23-of-29 from the free throw line. The Wolverines tallied 15 assists on 25 baskets. Other Michigan scorers in double figures included Tim Hardaway Jr. (16 points) and Stauskas (17 points). The Boilermakers also got double-digit performances from Sandi Marcius (13 points) and Rapheal Davis (15 points).

HALFTIME: Terone Johnson scored 13 points and grabbed four rebounds and Sandi Marcius added nine and five as Purdue leads No. 7 Michigan 34-30 at the half. Purdue, which trailed 28-20, used a 14-2 run to take the lead into the locker room. The Boilermakers fired often and fired with accuracy from distance, hitting 44 percent (4-of-9) of their three-point attempts. Purdue played team basketball in the first half, to the tune of nine assists on 12 field goals. Tim Hardaway Jr.scored 11 points to pace the Wolverines, who shot just 32 percent.