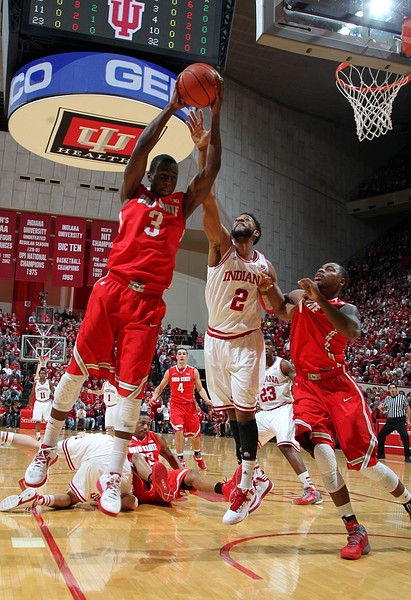 Deshaun Thomas and Aaron Craft scored nine of Ohio State's points in a decisive 11-2 run, leading the 14th-ranked Buckeyes past No. 2 Indiana 67-58 on Tuesday night. Thomas finished with 18 points and Craft added 15 as the Buckeyes (22-7, 12-5 Big Ten) won their fourth straight.

After clinching a share of its conference league title in 11 years with losses by Michigan State and Wisconsin on Sunday, the Hoosiers (25-5, 13-4) were trying to claim their first outright Big Ten crown since 1993. They will have another chance Sunday at No. 7 Michigan.

Cody Zeller scored 17 points and Christian Watford added 12 but the Hoosiers weren't themselves.

Evan Ravenel goes for putback No. 2:

Aaron Craft drives for And-1:

Evan Ravenel with putback No. 1:

FINAL: Aaron Craft scored 15 points, grabbed four rebounds and handed out four assists to lead No. 14 Ohio State to a 67-58 upset win over No. 2 Indiana on Tuesday at Assembly Hall in Bloomington. Deshaun Thomas scored a game-high 18 points for the Buckeyes, who also received nine points, five rebounds and two blocks from Sam Thompson. Cody Zeller contributed 17 points, grabbed four rebounds, and shot 5-of-9 from the field for Indiana (25-5) in the loss. The Hoosiers also got a double-digit performance from Christian Watford (12 points). The Buckeyes outrebounded Indiana 39-33. Ohio State was more accurate from the field, shooting 46 percent (27-of-59) to the Hoosiers' 40 percent (21-of-53).

HALFTIME: No. 14 Ohio State used a late 7-0 run to take a 28-25 halftime lead over No. 2 Indiana. The deficit marks just the second time the Hoosiers have trailed after the first 20 minutes this season. Neither team has been able to take control of the game as the lead changed hands five times. Sam Thompson leads all scorers with nine points, while Deshaun Thomas added six and Aaron Craft five for the Buckeyes. Despite foul trouble, Cody Zeller scored eight points to pace Indiana, which shot just 33 percent.