Iowa holds off Illinois, moves to within one of 20 wins 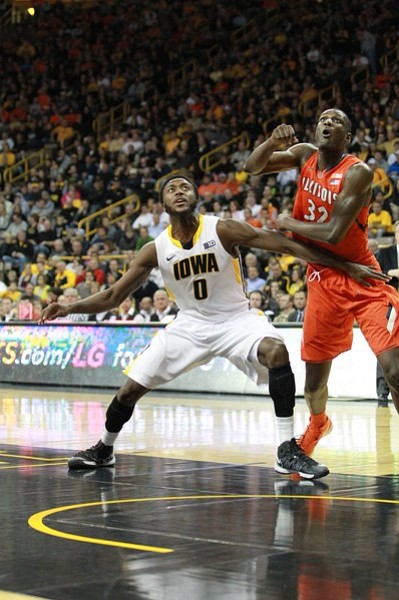 Devyn Marble scored 21 points and Iowa beat Illinois 63-55 on Tuesday night for its fifth win in seven games. Josh Oglesby added 10 for the surging Hawkeyes (19-11, 8-9 Big Ten). They tied a school record with 12 blocked shots, including six from Gabe Olaseni off the bench.

Oglesby buried back-to-back 3-pointers to turn a two-point lead into a 54-46 cushion with 3:19 left. D.J. Richardson then missed a dunk and Marble followed with a three-point play that put Iowa ahead by 11 with 1:39 to go.

Devyn Marble gets steal and layup:

Eric May rises for big-time swat:

FINAL: Iowa went into the locker room with the momentum and came out of the second half flying as well, which allowed the Hawkeyes to grab a 63-55 victory over Illinois on Tuesday at Carver-Hawkeye Arena in Iowa City. Trailing 28-27 late in the first, Iowa (19-11) went on a 15-3 run to seize an 11-point advantage in the middle of the second half. The Hawkeyes started the game out strong with a 15-4 run, which allowed them to take an 11-point lead in the first. Devyn Marble sparked Iowa, as he contributed 21 points, grabbed six rebounds, and handed out three assists for the Hawkeyes in the game.

HALFTIME: Illinois shot 27 percent and had four points in the first 11-plus minutes, but it only trails Iowa, 31-28, at halftime. Iowa, which shot 48 percent, did itself no favors with eight first-half turnovers. It also only attempted two free throws, to Illinois' 11. The Hawkeyes, who hit just 2-of-10 from beyond the arc, were led by Adam Woodbury's six points. Anthony Clemmons and Aaron White each added five points. Illinois goes into the break with the offensive rebounding advantage (12-5), and Brandon Paul already has seven points and four rebounds.