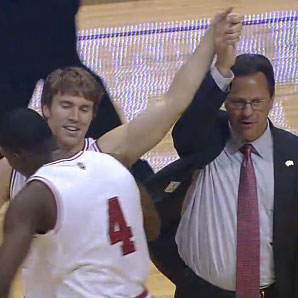 It?s Senior Night tonight in Bloomington, as Jordan Hulls, Christian Watford and Derek Elston will play their final games in venerable Assembly Hall. So, I?m gonna start daily links there. A big part of this annual rite is speeches by the seniors. And these speeches figure to be emotion-packed, given what these three seniors have witnessed in their time at Indiana.

Just a reminder: Right after the Ohio State-Indiana game, BTN/BTN2Go will have live coverage of the Hoosiers? Senior Night festivities from Assembly Hall. The night could be even more memorable for the Hoosiers with a win over Ohio State, as it would clinch the program?s first outright Big Ten title since 1993. A victory also would keep Indiana on track for the No. 1 overall seed in the NCAA tourney.

Here a few more headlines from around the conference.

Austin Hollins? shots may not be falling. But he?s still playing his trademark killer defense, which is why Minnesota is on a two-game winning skein and primed to finish the regular season with a flourish.

How bad have things been? Amelia Rayno of the Minneapolis Star-Tribune notes that in the last seven games, Hollins has shot just 34.8 percent from the field while making just 4 of 34 three-point attempts (good for 11.7 percent). Keep shooting, Austin. It will be OK.

Turns out Nebraska defensive back Terry Joseph was a wanted man after last season. How wanted? He turned down three jobs to stay in Lincoln. Check that out and more in this neato Nebraska spring football notebook.

Me? I?m most excited about these young Husker linebackers like David Santos and Courtney Love.

Bill O?Brien doesn?t have a deep roster at Penn State thanks to NCAA sanctions, so he has to deftly manage his numbers. Here is how he balances it.

In case you were wondering: Penn State has to be down to 65 scholarships by 2014. This is going to a challenge-and very interesting. But don?t you get the feeling O?Brien is going to be able to pull this off? I do.

I?m a big fan of Tom Shatel of the Omaha World-Herald. And you should be, too. Check out this replay of his weekly chat.

Marble?s dad, Roy, is Iowa?s all-time leading scorer. They will become the first father-son tandem in Big Ten annals to each reach 1,000 career points at the same school.

Graham Couch of the Lansing State Journal thinks Michigan State is capable of a boom ? or, unfortunately, bust.

Don?t look now, but support is resurfacing for Chief Illiniwek.

According to the Chicago Sun-Times, it?s been six years since Chief Illiniwek last danced at Illinois. But a student group has put an item on a campus election ballot trying to garner student support for making the American Indian mascot the official symbol of the campus. This week?s vote is non-binding and comes in response to a student-backed contest to suggest a new mascot. A new mascot? What would that be? I?m scared to even ask.

Ohio State QB Braxton Miller is ready to start spring drills. And the coaches can?t wait to start, either.

It?s easy to understand the eagerness of both parties, considering the Buckeyes will have nine starters back from last season?s offense that helped Ohio State go 12-0 in Urban Meyer?s debut. Miller spent time in December in California working with noted quarterback guru George Whitfield, who has worked with Johnny Manziel and others. It will be fun to watch this attack continue to morph into the power-based scheme Meyer desires.

Michigan State announced a big staff shakeup yesterday. But, honestly, how big was it? Not that big, really, when you take a closer look.

Jim Bollman-an old Mark Dantonio buddy-was brought in to be co-offensive coordinator and Dave Warner was promoted to co-offensive coordinator. How many new ideas and new concepts do think will be introduced? I?m guessing not many-if any. Then again, for the most part, what Dantonio has done in six years in East Lansing has worked just fine so far, right? Yes, the attack sputtered in 2012. But MSU was close to a big season. Consider: It went 2-5 in games decided by 10 points or less. So, major changes likely weren?t needed, right?

I already am loving the frankness of new Wisconsin coach Gary Andersen. He spoke from the heart recently about how rankled he was by assistant Jay Boulware bolting to take a job at Oklahoma despite being at Wisconsin for a very brief time.

?I told the kids this this morning,? Andersen said Monday, ?ultimately I hired him and it?s my fault.

?It?s disappointing. It?s upsetting. And I brought the wrong guy in here. We?ll be better off as we move forward.

?But we?ll get a coach in here that is excited about Wisconsin football and wants to be here in the worst way and he?ll do a tremendous job. We?ll rebound very quickly.

?But it?s a little taxing on some young men and it?s taxing on myself because I feel like I did a poor job. I?ll point that finger right at myself and we?ll make it right for them very soon.?

It?s fun to hear a coach speak so openly-instead of in a scripted, politically-correct manner.

Beilein admitting Burke is "without question" one of the best players he's ever coached. … That Beilein.

My take: Please tell me you aren?t surprised.

Areas of primary questions for Andersen going into spring, both lines and QBs.

My take: The quarterback situation is especially interesting with Joel Stave, Curt Phillips, Danny O?Brien and Bart Houston all involved this spring. Then, stud JC transfer Tanner McEvoy will arrive in the summer.

Izzo on his radio show: "It's taken on a whole new life now, this flopping, this charging thing that I'm really struggling with as a coach."

My take: It is getting out of control. But, Izzo either needs to adapt-or stop beefing about it-because it?s not going away; at least not for this season.

Izzo on his radio show: "It's taken on a whole new life now, this flopping, this charging thing that I'm really struggling with as a coach."

My take: It would be fitting and appropriate for Narduzzi to get that chance. I sure hope it happens.

Radio show caller says fanbase shouldn?t push Oladipo, Zeller to NBA. Crean: ?I?m not sure the fan base has got a lot to do with that.?

So, does Purdue catch Michigan looking ahead to IU, or do Boilers have better chance against the roller-coaster Gophers? Or, lose both?

My take: I think Purdue can win both games-as long as Terone Johnson and D.J. Byrd play like they did at Wisconsin.