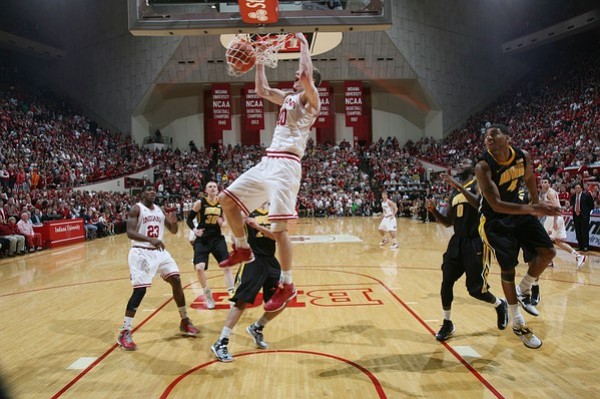 Losses Sunday by Michigan State at Michigan and Wisconsin at home to Purdue allowed the Indiana Hoosiers to clinch at least a share of their first Big Ten championship since 2002. Indiana can claim its first outright league title since-are you ready for this?-1993 if it wins one of its last two games: vs. Ohio State on Tuesday and at Michigan on Sunday. Terry Hutchens of the Indianapolis Star says it has been quite a ride for a program that was 1-17 in Big Ten play as recently as 2009.

The Wolverines were able to avenge an earlier 75-52 loss this season to the Spartans, showing grit and toughness. Finally!

And is there REALLY a better player in the Big Ten than Trey Burke, who had 21 points, eight assists and two steals? Sorry, Victor Oladipo. Burke?s late-game steal from Keith Appling and subsequent game-winning dunk were pure athletic genius for a guy who I think is the league?s top player. In fact, Burke says he knew Appling?s move.

While Michigan?s 58-57 win over Michigan State-the Spartans? third loss in a row-wasn?t a shock. Wisconsin?s defeat to Purdue was a stunner. A HUGE stunner.

This was a Boilermakers? squad that was reeling, having lost six of their last eight games. Meanwhile, the Badgers had won six of seven and were in the thick of the Big Ten title chase. So, what happens? Purdue wins, 69-56. And, it was Senior Day, no less, in the Kohl Center.

So, what?s it all mean? There is a four-way tie for second place in the Big Ten among the Badgers, Michigan, Michigan State and Ohio State, who all are 11-5. The fight is on to finish no lower than fourth so as to earn a first-round bye in the league tourney.

Doug Lesmerises of the Cleveland Plain Dealer has all the answers to Big Ten tiebreakers and such right here. Keep a cold compress nearby. Your head may ache while reading this.

There are some-ahem-dubious choices. San Diego State? Old Dominion? C?mon. Regardless, Illinois? digs are iconic in their own right. And on Senior Night, Brandon Paul enjoyed one more strong game in the grand ol? lady of Illinois basketball.

Lore Tate of the News-Gazette wonders if unrealistic expectations plagued Paul, just like they did Frankie Williams and Demetri McCamey. I think Tate is on to something.

The 2012-13 season isn?t over, but Marcus Fuller of the St. Paul Pioneer Press already is fretting about next season for Minnesota. No doubt, the Gophers will have trouble replacing Trevor Mbakwe, Rodney Williams and fellow seniors Julian Welch and Andre Ingram.

Spring football will begin at Ohio State on Tuesday. Doug Lesmerises of the Cleveland Plain Dealer details some key questions facing the Buckeyes, most of which come on a defense that must replace seven starters.

Is Mark Dantonio planning a staff shuffling at Michigan State?

Joe Rexrode of the Detroit Free Press says quarterbacks coach Dave Warner was a candidate for the offensive coordinator job when Dan Roushar got it two years ago — replacing Don Treadwell, who left to become head coach at Miami (Ohio). But reports say Jim Bollman has been hired as offensive coordinator in East Lansing. But Warner still could become co-offensive coordinator. Who would call plays? Stay tuned. This offense needs help.

Check out this video of Bill O?Brien discussing plans to play a future Penn State game in Ireland. Speaking of Penn State, some would love for the NCAA to reduce its harsh penalties on the Nittany Lions. But Charles Thompson of PennLive.com says it?s likely not to happen for a number of reasons. One of which is NCAA president Mark Emmert?s ego.

All parties involved with Penn State interests should just let this dog sleep, take the punishment and move on.

Martinez knows he has to be smarter w/ the football. Bo Pelini put it this way: "He's just got to let the offense keeping working for him"

My take: Take it easy, Taylor Martinez. Let the offense come to you. Whenever anyone forces anything, it usually isn?t good.

IU needs to beat Ohio State and Michigan this week to clinch NCAA tourney No. 1. So says guy who insisted no way Purdue would beat Wisconsin

My take: Agreed. If the Hoosiers win out the regular season-vs. Ohio State and at Michigan–they should be the No. 1 overall NCAA tourney seed.

Izzo: When you lose these games in a row, that's causing panic by fans.

My take: And rightly so. This is the time to be peaking-not descending.

Complete logjam at No. 2 in the Big Ten, four teams tied at 11-5. Battle for the first-round bye.

My take: This is the last remaining drama in the Big Ten race-the chase to avoid having to play a first-round game in the league tourney.

I can't tell if Big Ten basketball is overrated or if its teams will run amok once they're in the NCAAs.

My take: Regardless, anything fewer than four Sweet 16 teams and a squad in the Final Four will be failure, I think.

If Purdue plays like that at Wisconsin in 69-56 upset, you can be sure it will be focused as ever on its Senior Day vs. #Gophers.

My take: Purdue will need to beat Michigan and Minnesota-both at home-to take a 16-15 record into the Big Ten tourney. If the young Boilers then win a game in the Big Ten tourney, they could earn an NIT bid. That would be amazing.