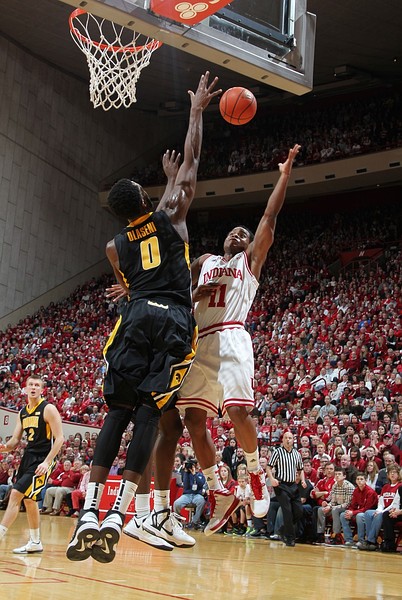 The final week of the regular season is upon us-and there is little drama left to the Big Ten race. But it sure was a fun ride leading up to this point.

Indiana clinched a share of its first league championship since 2002 on Sunday-and it didn?t even have to dribble a ball or make a shot to do so. Losses by Michigan State (at Michigan) and Wisconsin (at home to Purdue) paved the way for the Hoosiers, who can claim their first outright Big Title crown since 1993 with a home win vs. Ohio State on Tuesday on Senior Night or with a victory at Michigan in the regular-season finale on Sunday.

Indiana also is still jockeying to be the No. 1 overall seed in the NCAA tournament, which likely would mean a run through Dayton, Ohio, and Indianapolis in the Midwest Regional on the way to the Final Four in Atlanta. To earn the top overall seed, Indiana may need to win its two remaining games. So, there?s a little extra motivation for the Hoosiers.

A bit more drama pivots around four, 11-5 teams-Michigan, Michigan State, Ohio State, Wisconsin–that are fighting to finish second, third and fourth to earn a bye in the first round of the Big Ten tourney.

Take a look at the week ahead, as we steam toward the Big Ten tourney in Chicago that begins on March 14.

GAME OF THE WEEK: Indiana at Michigan, Sunday. The Hoosiers already have a share of their first Big Ten title since 2002 locked up. And they may have the outright crown in hand by the time they get to Ann Arbor. But Indiana still is playing for the No. 1 overall seed in the NCAA tourney. A win here would augment Indiana?s resume. Michigan may be playing for a share of the Big Ten title-if Indiana loses at home to Ohio State on Tuesday. But at the least, the Wolverines need another big win to improve their NCAA profile; they are just 4-4 in their last eight games. Indiana won the first meeting, 81-73.

DON?T OVERLOOK THIS GAME: Wisconsin at Michigan State, Thursday. Each squad is coming off a disheartening loss on Sunday. But there is no time to pout. Big things could still loom-especially if Indiana loses on Tuesday at home to Ohio State. If that happens, the winner of this game would be primed to earn a share of the Big Ten title with a victory in the regular-season finale coupled with a Hoosiers loss at Michigan on Sunday. Hey, it?s possible. The Spartans won the first meeting in Madison, taking an ugly 49-47 victory.

BEST INDIVIDUAL MATCHUP: Ohio State?s Aaron Craft vs. Indiana?s Victor Oladipo, Tuesday. The duo may not match up all of the time. But when they do, it will be electric. Each is talked about as the top defensive player in the Big Ten. Take your pick. Which one can crack the other?s suffocating defense? Craft flashed his offensive prowess recently in scoring a career-high 21 points vs. Michigan State. Oladipo is an athletic dynamo who excels off the bounce and as a shooter.

[ RELATED: Where does your team land on our latest power rankings? ]

MUST WIN: Indiana over Ohio State, Tuesday. The Hoosiers already have a share of the Big Ten championship. But you know they want it all for themselves as they press for the No. 1 overall seed in the NCAA tourney. And Indiana can do that by dumping the Buckeyes in what figures to be an emotion-packed Assembly Hall on Senior Night. Seniors Jordan Hulls, Derek Elston and Christian Watford will play their last game in Bloomington. And it also could be the last game for junior Victor Oladipo and sophomore Cody Zeller, who may each turn pro. Indiana doesn?t want to lose to Ohio State and have to win at Michigan on Sunday to claim the outright crown.

UPSET ALERT: Wisconsin at Penn State, Sunday. We saw what the Nittany Lions are capable of last week, when they stunned No. 4 Michigan in State College, Pa. So, the Badgers will be ready. But Wisconsin may still be reeling from a crushing home loss on Senior Day to Purdue on Sunday. The Badgers will need to bounce back and execute on offense vs. a Penn State squad that is well coached, plays hard and has underrated talent. Making the Nittany Lions even more deadly? They have nothing to lose, while the Badgers may have a share of the Big Ten title on the line if the proper scenario unfolds leading up to this game.

BIG WEEK: Minnesota. The Golden Gophers were listing, having lost eight of 11 games to put the team on the dreaded NCAA bubble. Poor shooting and turnovers-among other things-were hurting the Gophers. But Minnesota reversed its fortunes with a stunning 77-73 win over No. 1 Indiana on Tuesday. And the Gophers followed that will a 73-44 demolition of a Penn State club that was coming off a win over No. 4 Michigan. And with games remaining at Nebraska and at Purdue, Minnesota could finish the regular season with four wins in succession to give it some needed mojo heading to the Big Ten tourney.

TOUGH WEEK: Michigan State. This usually is the time of year when Tom Izzo?s squad usually is peaking. Not so. After winning five in a row and 11 of 12, MSU has dropped three in succession. Not long ago, the Spartans were in the thick of the Big Ten title chase. But losses last week at home to Indiana and at Michigan pushed Michigan State into an even deeper funk. Home games vs. Wisconsin and Northwestern to finish the season may offer some much-needed relief.