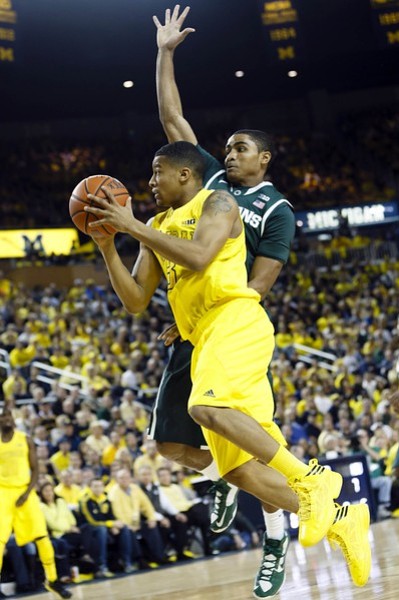 Trey Burke stole the ball from Keith Appling near midcourt and went in alone for a dunk with 22 seconds remaining, then made another steal in the final seconds to give No. 4 Michigan a pulsating 58-57 win over No. 9 Michigan State on Sunday.

The Spartans (22-7, 11-5 Big Ten) had the ball with the shot clock off at 56-all, but Burke's first big defensive play enabled Michigan (24-5, 11-5) to take the lead. After Derrick Nix made one of two free throws and Mitch McGary missed the front end of a 1-and-1 for Michigan, Burke stole a pass by Gary Harris to end it.

The Michigan State loss clinches at least a share of the Big Ten title for Indiana.

Adreian Payne elevates for another slam:

Tim Hardaway Jr. throws one down:

FINAL: No. 4 Michigan trailed in the waning moments of Sunday's game, but took the lead for good on a field goal by Trey Burke with with 21 seconds to go and hung on for a 58-57 triumph over No. 9 Michigan State at Crisler Center in Ann Arbor. A run lasting across the halftime break allowed Michigan (24-5) to grab the advantage. The Wolverines trailed 31-24 with 46 seconds left in the first half, but an 18-4 run allowed them to take a seven-point lead midway through the second half. Michigan State (22-7) struggled shooting the ball in the game. The Spartans made 75 percent of their free throws (9-of-12) and they shot 36 percent (21-of-59) from the field. Adreian Payne had a good game for Michigan State in defeat with 17 points, 12 rebounds, and 6-of-11 shooting from the field.

HALFTIME: Adreian Payne scored 12 points and grabbed four rebounds to lead No. 10 Michigan State to a 31-28 halftime lead at No. 4 Michigan. The Spartans controlled the boards, outrebounding the Wolverines 23-14 in the first half, and hit 5-of-11 3-point attempts. Trey Burke scored 11 points and dished out four assists to lead Michigan, which also received six points from Tim Hardaway Jr. and Glenn Robinson III. The long-distance game has been bottled up for Michigan, which made 0-of-6 from beyond the arc in the first half, while shooting 57 percent (12-of-21) on two-point shots.