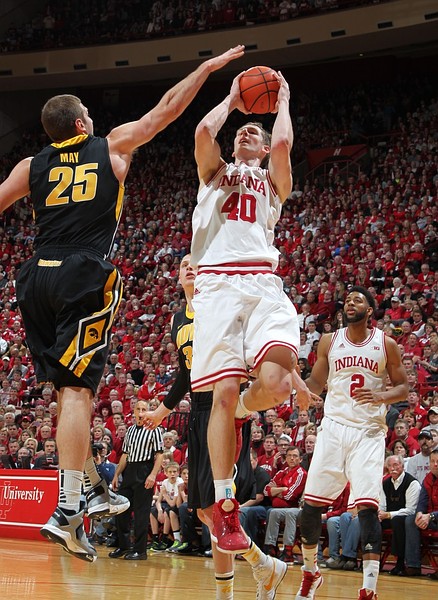 Cody Zeller overcame a sluggish start to score 22 points and Kevin "Yogi" Ferrell added a career-high 19 as No. 1 Indiana got past Iowa 73-60 on Saturday night. The Hoosiers (25-4, 13-3 Big Ten) rebounded from this week's loss to Minnesota. It was no typical night for Indiana's shooters, who were 38.9 percent from the field and didn't hit a 3-pointer until the final minute.

But Indiana played defense and took care of the ball.

Eric May drives for the late dunk:

Adam Woodbury opens second half with a dunk:

Cody Zeller dives to knock it loose & throws it down:

FINAL: Cody Zeller scored 22 points and grabbed 10 rebounds and Kevin Ferrell added 19 points to lead No. 1 Indiana to a 73-60 victory over Iowa on Saturday at Assembly Hall in Bloomington. The Hoosiers (25-4) struggled with their shooting touch in the victory, going 39 percent (21-of-54) from the field and 69 percent from the free-throw line (29-of-42). The Hoosiers, who grabbed 25 offensive rebounds, also received a double-digit effort from Victor Oladipo (10 points). Devyn Marble had 20 points and hauled in six rebounds for Iowa (18-11), which shot just 38 percent from the field (21-of-55). Iowa also got double-digit performances from Eric May (12 points) and Aaron White (14 points).

Iowa has been whistled for 25 fouls…matching a season high.

Iowa should just let Marble shoot every possession. He has 17 on 6-of-12, 5 rebounds. Iowa down 55-39 at William Tell Overture. Always neat

This game may never end. We're at 38 fouls and counting.

Indiana and Iowa are a combined 1-of-20 from 3-point range. Marble has the only 3-pointer.

With his 3 steals thus far tonight, Victor Oladipo has 67 for year, 2nd all time and just 7 short of Isiah Thomas' single season record

Aaron White stuck on 2 points.. Oladipo's got him zipped up. Tremendous defense.

HALFTIME: No. 1 Indiana leads 26-14 at halftime after locking down Iowa's offense, holding the Hawkeyes to 29 percent shooting and just seven field goals. The Hoosiers dominated on the glass in the first half, outrebounding Iowa 30-17. Indiana was able to draw fouls and get to the line with regularity, however they only made 10-of-18 (56 percent) from the charity stripe. Cody Zeller has a game-high nine points for the Hoosiers, who also received five points and six rebounds from Victor Oladipo. Devyn Marble, Iowa's leading scorer (14 ppg), has been held to two points on four shot attempts. Melsahn Basabe has six points and four rebounds.

Iowa's Devyn Marble and Aaron White were a combined 2-of-8 from field in first half. Four points, five turnovers.

14 is apparently the magic number for the half. Iowa 14 points, 14 turnovers and two teams are 0-for-14 combined from 3-point range.

I think the crowd appreciated Cody Zeller diving to the floor at midcourt to knock the ball away more than the dunk itself.

And Fran McCaffrey has been assessed a technical foul. Man, this is not the start Iowa wanted. #iubb

Iowa with six turnovers in five minutes. As Ed Begley said in the movie "Pittsburgh," NG. Not Good.

Zeller has had three looks inside of 3 feet and is 0-for-3 from field. Just missed a big dunk try.

Watford got hit in the eye. Going to the bench. #Iubb