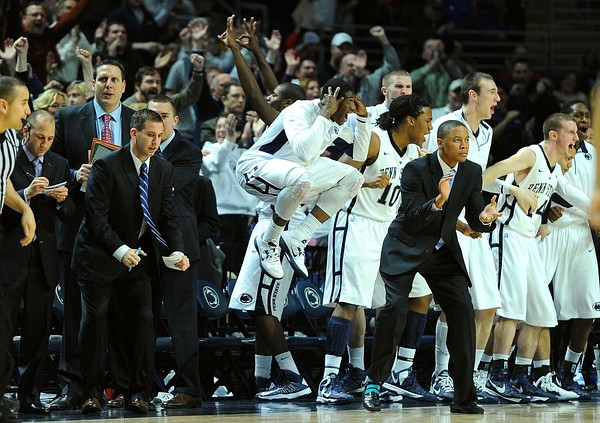 With 10:39 to play in the Bryce Jordan Center, Michigan's Jon Horford finished an easy dunk off an inbounds play to put Penn State down 15 points. At that very moment, KenPom's win probability gave the Wolverines a 99.3 percent chance of leaving town with the victory. In other words, given the time, score, and team qualities, you'd expect a game replayed 150 times from that exact situation to end with Michigan losing only once.

Then Jermaine Marshall happened. The 6-4 junior took over the game, scoring 16 points the rest of the way to spearhead an incredible offensive finish from the Nittany Lions. At the time of Horford's dunk, Penn State had scored 51 points on 51 possessions. That isn't a bad output given the team's limitations, but it was clearly not going to be enough to knock off Michigan. The Nittany Lions would then score 33 points on the game's final 18 possessions. Of those 18 possessions, only three ended without Penn State scoring. It was a incredible run, driven by an aggressive penetrating approach that led to either free throws or kickouts for open threes.

Michigan did little to stem the tide, as it appeared the Wolverines were just waiting for the clock to run out. Case in point: with 9:29 remaining and Michigan still holding a nine point lead, Nik Stauskas passed out of a strange triple team to Trey Burke. This left only Ross Travis back to defend three Wolverines, if only Burke would have made an easy pass to Caris LeVert at the top of the key. Instead, Burke held the ball, allowing Penn State to get back in position. To be fair, this possession did end in a Glenn Robinson III slam following a missed three by Stauskas, but the lack of aggression from Michigan was evident. Fortune favors the bold, and Penn State was the aggressor over the final 10 and a half minutes.

The Wolverines have now lost four straight games on the road, though the previous three losses are certainly not shame-worthy (at Indiana, at Wisconsin, at Michigan State). The good news for Michigan? NCAA tournament games aren't played on the road. This loss probably costs the Wolverines any chance they had at a Big Ten title and a one-seed, but it doesn't really change the fundamental view of this team. Michigan has a fantastic offense and a middling defense, making these Wolverines look a lot like last season's Indiana Hoosiers. In fact, this loss to Penn State looks a lot like Indiana's loss at Nebraska last season. This is still a dangerous team that could make a tournament run, but it appears we were a lot closer in our Michigan prognosis than we thought a month ago.

Elsewhere, Ohio State pulled away late to beat Northwestern. The Buckeyes actually trailed the Wildcats with four minutes remaining but finished the game on a 15-4 run to avoid the bad loss. Shannon Scott was central to this run, as he picked up four of his eight assists and one of his four steals during this four minute stretch. Lenzelle Smith had one of the finest games of his career, finishing with 24 points, six rebounds, three steals, and no turnovers. That output is even more impressive given the glacial pace of this game (57 possessions). Northwestern's Tre Demps really likes playing Ohio State–he's now scored 30 total points in the two meetings.

Iowa didn't get quite the same scare against Purdue, but the win was uglier. The Hawkeyes led by as many as 14 points but never truly shook the Boilermakers, and this was still something of a game with two minutes remaining and the lead down to six. Josh Oglesby, who had missed 10 of his last 11 three-point attempts, splashed a three to beat the shot clock and the Purdue threat was extinguished. Both teams scored under a point per possession. For Iowa, the problem was awful two-point shooting, as the Hawkeyes made just 29 percent of their shots inside the arc. To be fair, defending the two is the strength of the Purdue defense, but that's still a miserable number. Melsahn Basabe was the main offender (one for eight), but the entire team had trouble getting to the rim and finishing.

Still, every win counts for Iowa, and this one leaves open the possibility of a 9-9 finish. Obviously, an unlikely win at Indiana tomorrow would change the discussion, but realistically the Hawkeyes need to finish .500 and then make some noise in the Big Ten tournament to sneak into the Big Dance. That loss at Nebraska still has to sting.

The weekend's biggest matchup comes Sunday afternoon, as Michigan State visits Michigan (3pm CT, CBS). Both teams are coming off losses that did major damage to their Big Ten title hopes, but the in-state rivalry figures to provide plenty of motivation. March is finally here, and we're a mere 16 days from Selection Sunday.