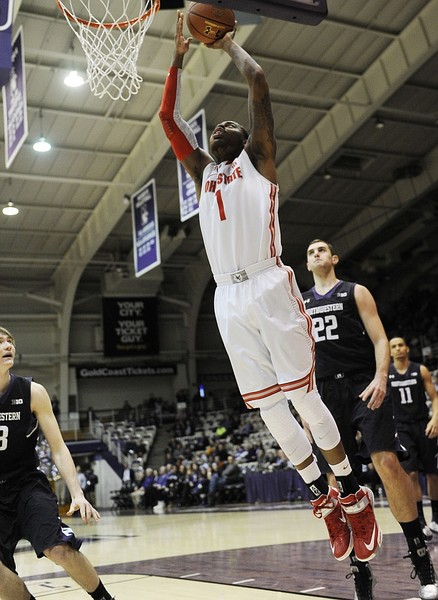 The Buckeyes (21-7, 11-5 Big Ten) moved one-half game ahead of Michigan and took sole possession of fourth place in the Big Ten with another difficult win over a team that's given it fits in recent years. See the full box score.

Smith, Jr. sparked the Buckeyes, as he scored 24 points, hauled in six rebounds, shot 7-of-12 from the field, and went 6-of-10 from beyond the arc in the win. Ohio State went 13-of-23 from the charity stripe as a team (57 percent). The Buckeyes shared the ball to the tune of 15 assists on 21 baskets.

Ohio State also got a double-digit effort from Deshaun Thomas (19 points). Kale Abrahamson contributed nine points and corralled nine rebounds for Northwestern (13-16) in a losing effort. The Wildcats were hot from long range, hitting 8-of-19 threes for a 42 percent night from beyond the arc. Northwestern got double-figure scoring from Dave Sobolewski (13 points) and Tre Demps (14 points). The Wildcats have now lost their last six games.

Dave Sobolewski drives for a late layup in the first half.