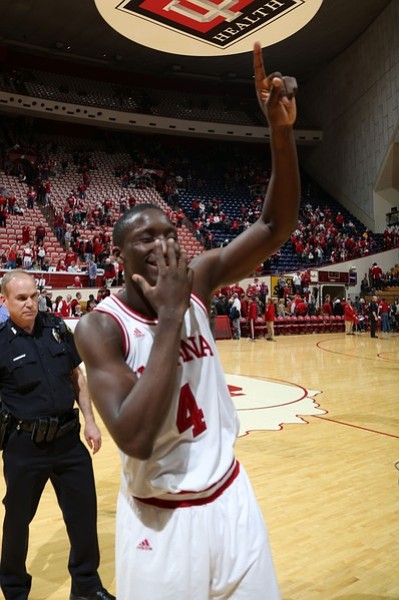 Should Indiana be on upset alert tonight when it plays at Minnesota? Hmmm. Maybe. Let?s start daily links there. The Hoosiers withstood a furious Minny rally to take an 88-81 victory back in January. But the Golden Gophers are struggling, having lost eight of the last 11 games and dropping their last two by an average of 23.5 points.

Conversely, the Hoosiers are rolling, ranked No. 1 in the nation and winners of nine of 10. And with two more victories, Indiana will clinch at least a share of its first Big Ten title since 2002. The Hoosiers seem to be peaking-almost too soon.

For the Golden Gophers to have any chance, Trevor Mbakwe will need to have a big game. And he hasn?t measured up to Indiana star Cody Zeller this season in what has been a disappointing campaign for Mbakwe. That continues a bizarre trend that has seen big men struggle under Tubby Smith.

Marcus Fuller of the St. Paul Pioneer Press says that Minnesota hasn?t been able to rely enough on Mbakwe's offense this year — and it has little to do with last year's knee injury or this year's sore wrist. Bottom line: His inside game just lacks development.

Yes, some Michigan State fans are disappointed after the Spartans lost their last two games. But have no fear, says Graham Couch of the Lansing State Journal: Michigan State still has a shot at a No. 1 seed.

Here is how Couch sees it, and I think he?s correct: Regardless of what the Hoosiers do from here on out, MSU could still grab a No. 1 seed if the Spartans win Sunday at Michigan, beat Wisconsin and Northwestern at home and then don?t get dumped right away at the Big Ten tournament. Two wins over both Michigan and Wisconsin, along with the early season win over Kansas, paired with a 14-4 record in this year?s Big Ten, is a terrific NCAA tournament profile, says Couch.

But Couch doesn?t stop there. He thinks MSU's resume would be stronger than that of Gonzaga, Michigan (if MSU wins Sunday) and maybe Kansas. Hmmmm.

It?s always fun to see how Lee Barfknecht of the Omaha World-Herald ranks the Big Ten teams. Here you go.

In case you didn?t already know it: Trey Burke is a special player. So, Nick Baumgardner of MLive.com heeds Wolverines fans to enjoy him while they can.

Baumgardner points out that in large part to Burke, Michigan has stayed in the national college basketball conversation all season — even when it struggled. No matter what you think of the Wolverines, there's a certain level of respect commanded by the team because of Burke. And get this: Burke has a chance at becoming the first Big Ten player since Magic Johnson to average 17 points and 7 assists in a season. That?s amazing.

Yes, Ohio State is a long, long, long shot to win the Big Ten. But it still must do all it can to avoid being the No. 5 seed for the league tournament, says Doug Lesmerises of the Cleveland Plain Dealer. The top four teams get a bye.

The Buckeyes haven?t been the No. 5 seed since Thad Matta?s first season in 2004-05. But even if OSU is the No. 5, it figures to play a Penn State team that is winless in Big Ten action. Still, not having to play an extra game would relieve some wear and tear on the Buckeyes.

Jeff Potrykus of the Milwaukee Journal Sentinel has a nice feature on Badgers freshman Sam Dekker, who has really come on as the season has progressed.

This quote from Dekker says it all about the kid and why he is so lovable  "I'm me. There's not really a word for it. I'm goofy. I'm just a kid that is weird."

Purdue has a special freshman in A.J. Hammons. But at times, he plays like a freshman. That?s why Matt Painter sent the big fella a message by not starting him against Northwestern on Sunday.

Getting the most out of his players has been an issue for Painter, who is headed for his worst season since going 9-19 in his debut in 2005-06. Painter wishes he would have signed a few more players last spring to give the Boilermakers more depth, particularly in the backcourt. The current situation, he said, forces him to continue using players who repeat mistakes.

?I?ve got to do a better job of finding 13 guys on scholarship,? he said in a teleconference.

Listen to the teleconference here:

I will say this: I appreciate Painter?s frankness. Still, there is no excuse for Purdue to be this bad in his eighth season as head coach. Injury and ineligible players are not issues. This is basically a fully loaded roster-and the team has struggled. Yes, Purdue is young-but so are other teams. (Michigan.) Freshmen play big minutes for many teams. This isn?t 1983. It?s 2013. Freshmen come ready to play.

Northwestern is going to miss the NCAA tournament-again. It?s forever and counting, as the program never has been to the Big Dance. It is quite remarkable. Bill Carmody is in his 13th season in Evanston trying to do the seemingly impossible. Will he be back for a 14th? It seems his fate will be decided after the season.

No doubt, this year?s team has been wrecked by injuries, which basically have ruined a team that many felt may have been primed for an NCAA breakthrough. NU is down to seven scholarship players-including four freshmen-and has endured five losses in a row for the first time since 2008 and has lost its last three games by a combined 80 points. Most of key players will be back next season. Here?s hoping Carmody is, too, for what could be his best team yet.

Audrey Snyder of the Harrisburg Patriot-News does a good job of breaking down how four Penn State players-Matt Stankiewitch, Jordan Hill, Gerald Hodges, Michael Mauti–performed at the Combine.

?I think you're going to have all types of rumors about us and the Big 12,? Smith told Fowler. ?We're not doing anything right now. We'll sit and evaluate Rutgers' and Maryland's transition. We don't want to screw that up. Right now we're not aggressively pursuing anyone.?

So, there?s that. What did you expect Smith to say? Exactly.

I think we all can agree that Tim Beckman?s debut at Illinois was, ahem, rough. A 2-10 record says so, along with lagging attendance. But, Beckman won?t divert from his plan. As he told Bob Asmussen of the Champaign News-Gazette: ?The plan is the plan. You stick by the plan. You?ve seen it very, very successful. There might have been a tweak here and there, but there is still the philosophy of competitiveness, the philosophy of hard work, the philosophy of mental toughness.?

Maybe a revised staff will help, as Beckman will have five new assistants in 2013.

Sometimes you look too much at who left and who's coming and forget guys like OL Kyle Dodson are already imbedded at OSU ready to rise.

My take: The message: Urban Meyer?s Buckeyes are loaded. Yes, like that is a surprise.

Jared Berggren needs 2 blocks to tie and 3 to pass Rashard Griffith (124) for the most in Wisconsin history. #badgers

My take: Anytime I can work Rashard Griffith into daily links, I?m gonna do it.

Ryan Evans' routine on his jump-shot FTs: Gets ball, one bounce and up he goes. Made about 80 percent of his attempts at end of practice..

My take: Look, I?m all for thinking outside the box. But this is gonna be a riot.

Interesting from Izzo on B1G tourney, says it's a meeting place for alums. ?Football has a homecoming game. I think ours is maybe the BTT."

My take: I never thought of the Big Ten tourney like that. But I think Izzo is correct.

Michigan State still needs an OC – any candidates out there interested? Have not heard one controlled leak yet…not a good sign

My take: Me? I say hire someone from the outside. It?s time for a fresh perspective and new ideas.

Beilein still won't say whether or not he thinks Michigan's a lock for the NCAA tournament.

My take: OK. I will: Michigan is an NCAA tourney lock. Was that so difficult?

Purdue has at Iowa, at Wisconsin, Michigan and Minnesota left. How many will they win? Who do they beat?

My take: I think they will be lucky to win one-Minnesota at home.

Remember just because Vic Oladipo is have a POY yr doesn't diminish what Cody Zeller is doing..he's having an All American year

My take: Was anyone saying anything differently?