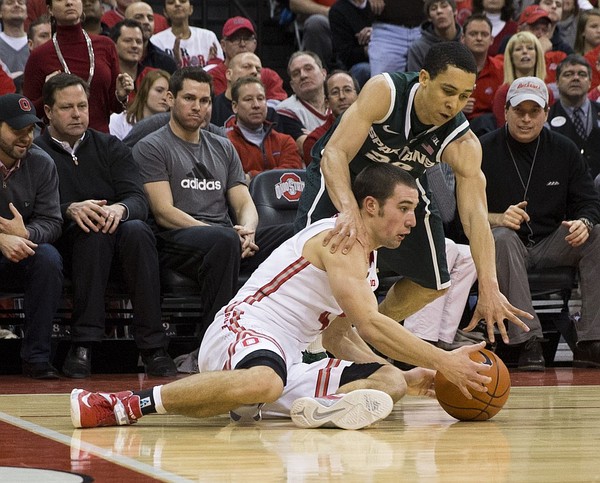 How tough is the Big Ten this season? A week ago, several people thought Michigan State might be the Big Ten's top team. Today, following back-to-back losses, the Spartans land at No. 4 on my latest Power Rankings. Where does your team land? Find out in this post. Oh, and feel free to send me your thoughts, either in the comment box in this post or on Twitter (@BTNBrentYarina).

3. Wisconsin, (19-8, 10-4) – How confident is Ben Brust? Not only has the junior averaged 15 points in the last six games, he's reached double figures in all six – a steak that doubles his previous longest run of double-digit scoring.
Last week: No. 4

4. Michigan State, (22-6, 11-4) – Quite the surprise, Keith Appling compiled the worst consecutive games of his career this past week. The point guard went a combined 2-of-14 from the field (14 percent) and averaged 4.5 points, 1.5 assists and 3.5 turnovers in losses to Indiana and Ohio State.
Last week: No. 2

5. Ohio State, (20-7, 10-5) – Deshaun Thomas tied a season-low with four field goals Sunday, however Ohio State still took down No. 5 Michigan State. That's impressive, and the Buckeyes have Aaron Craft and his career-high 21 points to thank.
Last week: No. 6

6. Illinois, (20-9, 7-8) – The Illini went 21 days without a loss before falling at then-No. 7 Michigan on Sunday. For what it's worth, each of the last two times Illinois has lost following a win, it's suffered a three-game funk. Next two dates: vs. Nebraska and at Iowa.
Last week: No. 5

7. Iowa, (17-10, 6-8) – Because Aaron White draws so many fouls, his field goal attempts can be a little deceiving. Whether he's getting to the line zero or 10 times a game, the Iowa sophomore needs to put up more than the 5.3 shots that he's averaging the past four games.
Last week: No. 7

10. Purdue, (13-14, 6-8) – All of the sudden, Terone Johnson thinks he's a 3-point shooter. The junior made a career-high four treys – on five attempts – Sunday night against Northwestern. And this a guy who tied a career-high with three 3s two games earlier.
Last week: T-No. 9