Kirk Cousins: 'It was a phenomenal rookie year' 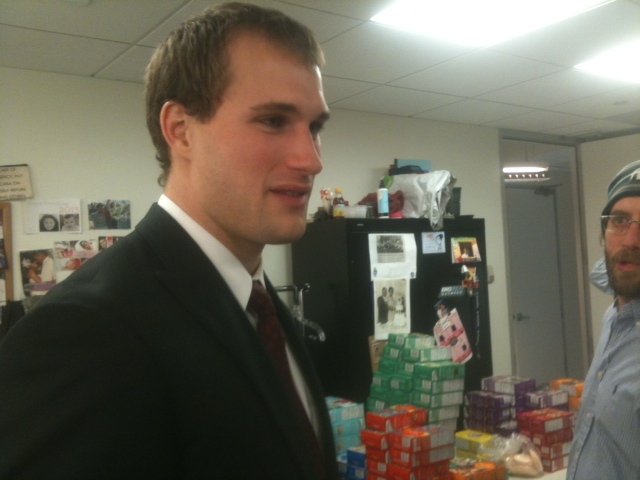 Michigan State product and current Washington Redskin Kirk Cousins joined "Big Ten Football Report" on Monday. The show also airs several times Tuesday morning. Check out the TV schedule for the complete list. With Cousins in studio, BTN.com flagged down the quarterback for a quick Q&A. We asked him about his transition to the NFL, his Hail Mary pass, Mark Dantonio and Robert Griffin III, among other things.

BTN.com: What can you tell us about the transition to the NFL and your experience as a rookie?
Kirk Cousins: It was a phenomenal rookie year, not only for me individually, but the Redskins as a whole. We made the playoffs, I played more than I thought I would, and I had a good preseason. I enjoyed my coaches, I enjoyed my teammates. While the game is a little faster than playing in the Big Ten, I think I made the adjustment well. I think that goes to show that the Big Ten really prepares you well for the NFL game.

BTN.com: You've probably answered it thousands of times, but what was your reaction to being drafted by the Redskins?
Kirk Cousins: I was as surprised as anyone about where I was picked. Obviously, I didn't think the Redskins were a potential place for me to land. But the more I looked into my situation, the more I spent time in D.C., the more I realized how good of a situation it was for me to be in, between the offensive system, the coaches that I had to coach me, the teammates that I had around me – not only Robert Griffin, but Rex Grossman has been tremendous in my development.

And to have a coach like Mike Shanahan to help teach me the NFL quarterbacking ways is hard to beat. So, I'm excited about where I am. I think it's a great opportunity. Although I don't have a major starting role, I feel like it's a marathon and not a sprint. I'll get my opportunity if I'm good enough.

BTN.com: You mentioned Rex Grossman there. You wore No. 8 at Michigan State, so did you happen to try to get that number from him?
Kirk Cousins: I didn't. I got a text right after the draft from the equipment manager of the Redskins saying I only had three choices: 2, 5 or 12. I told him I'd go with 12. Maybe when Rex leaves, if he ever does leave, I would think about getting 8. But I like 12. I think it fits me well and I just might stay with that as long as I can.

BTN.com: What's your relationship with Robert Griffin III like?
Kirk Cousins: We have a strong relationship. Early on, we didn't know each other, hadn't crossed paths much, and only watched each other from a distance. It takes time to build a relationship, but after going through an entire rookie year together, I think we came out of the year as good friends and great teammates.

BTN.com: With RG3's knee injury perhaps keeping him out until early next year, how are you preparing this offseason?
Kirk Cousins: Obviously, he's fighting through a tough ACL injury that he's rehabbing from. I'm trying to get ready to go if I have to be called upon. I'll go into next year with an open mind and be ready to contribute however I can.

BTN.com: Let's talk about the Hail Mary pass to Keith Nichol. How many times have you watched it, and what do you feel when you see it?
Kirk Cousins: There's a lot of emotions that it brings about when you see it – even for the, whatever, hundredth time you've seen it. I remember being in the D.C. this summer, and all the Redskins were giving me a hard time because Big Ten Network kept replaying the game, kept replaying the moment. They'd say, 'Man, every night I go home and I feel like I'm watching that Hail Mary over and over.' I said, 'Hey, it was a pretty special moment!'

It's fun to see it; it's fun to be all the way in D.C. and have people talking about the Spartans and about the Big Ten. It just goes to show the reach this conference has.

BTN.com: Can you share with us your best Mark Dantonio story?
Kirk Cousins: Coach has been a tremendous supporter of mine and just cares about me. It showed in my senior year. I went to him before we played Ohio State as we were about to start Big Ten play, and I shared with him how I felt like I was out of gas, running on empty. Coach then made it a point every week, from that point on, to spend time together before every game, right in the locker room. We'd take time out, just the two of us, and just talk. Coach wanted to make sure I left Michigan State with a positive feeling, not just about football, but about the whole experience. It just goes to show how much he cares about his players to take that kind of time to try to relate to them in pressure situations.

BTN.com: Of the talented Spartans in this year's draft, who will have the best pro career?
Kirk Cousins: That's a great question, a tough question to answer. I think all the guys that are in the draft and at the Combine right now are talented enough to be NFL stars. I think it comes down not so much to the talent, as it does to do they act like professionals, do they act with maturity, do they carry themselves year-round in the kind of way that gives you the chance to have a long career? I think talented players get into the NFL, but smart players last.

As far as talent, it's hard to separate a Le'Veon (Bell) from a Dion (Sims) or a Will Gholston from a Johnny Adams. They're all pretty special, and they all have the talent to last in this league.

BTN.com: Thank you, Kirk. Best of luck.
Kirk Cousins: Thanks!

Here's a photo gallery of Cousins from his time at BTN: