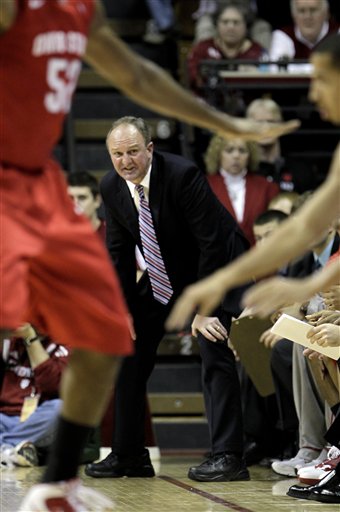 Fun item from esteemed ex-colleague David Fox of Athlon Sports on the top football/basketball coaching tandems in the nation. Topping the list: Ohio State?s duo of Thad Matta and Urban Meyer. Michigan?s duo of Brady Hoke and John Beilein is No. 2 in the nation, according to Athlon.

Here is how Athlon ranks the Big Ten tandems.

Hard to argue with Fox putting Matta and Meyer on top. Matta has taken Ohio State to two Final Fours, three Big Ten tourney titles and a share of five regular-season crowns. Meyer won two national titles at Florida and debuted with a 12-0 mark in Columbus last season.
I would have put Michigan State No. 2 on this list instead of Michigan. I think Mark Dantonio has done more over the course of this career than Hoke; and Tom Izzo?s resume dwarfs John Beilein?s. In fact, they aren?t even in the same zip code.

And you could make a case for Minnesota?s duo of Tubby Smith/Jerry Kill being ahead of Indiana?s Kevin Wilson/Tom Crean. Kill has had great success in a long tenure as a head coach at places like Northern Illinois and Southern Illinois. Smith won a national championship at Kentucky.

Iowa also is too low at No. 10. Yes, Kirk Ferentz?s program is trending down, but he has made the Hawkeyes one of the Big Ten?s premier programs since arriving in 1999. Fran McCaffrey has had nice success at places like Siena, UNC Greensboro and Lehigh, taking them all to the NCAA tourney.

Here is how I would have ranked the Big Ten coaching tandems.

How would you rank them?