Big Ten Geeks: The best B1G defense in a decade? 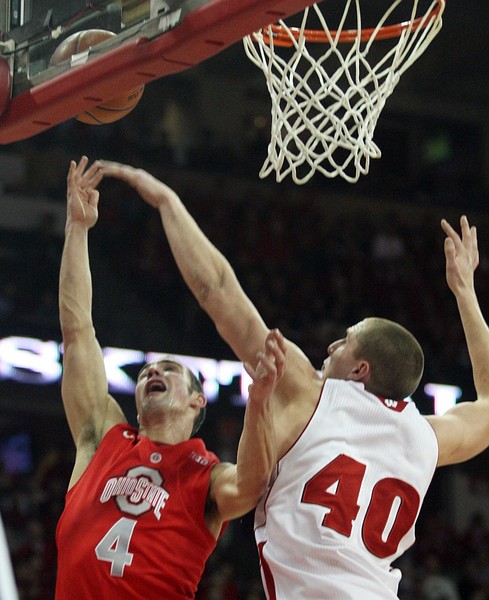 Wisconsin held Northwestern to a paltry 0.74 points per possession in one of the most methodical blowouts you'll ever see. The Wildcats were just consistently outclassed, as the Badgers steadily built their lead until it had swelled to the final 28-point margin. Northwestern's lowly output helped Wisconsin nudge its in-conference defensive efficiency down to 0.901 points per trip.

If the Badgers can keep that number at that level, it would be the Big Ten's lowest ever in the tempo-free era (since 2002-03). The conference has seen some fantastic defensive squads over those ten-plus seasons, but none of them were able to stifle Big Ten foes as well as this Wisconsin team.

Of course, with anything, context matters. If a conference happens to be full of poor offensive squads for a season, the best defensive team of that season could be made to look historically good even if it isn't. So, let's take a look at how the best defensive teams over the past 10 seasons compared to the conference average efficiency (in order of DE+, which is explained below).

In the tempo-free era, only last season's Michigan State squad, spearheaded by Draymond Green, defended better relative to conference average than this season's Badgers have thus far, and it's awfully close. Wisconsin has a legitimate chance to lower their in-conference defensive efficiency down the stretch, as three of the remaining four games come against the conference's worst offenses.

With the Badgers, we just might be watching an historically stifling defense.

One other take away from that table–how good are Bo Ryan and Bruce Weber at coaching defense? One of those two men coached the Big Ten's best defense in six of the past 11 seasons. No other coach has led the conference more than once in that span. Weber is surprisingly winning with offense in his first season at Kansas State, but we can expect that dynamic to change as that program fully takes on his DNA.

Ohio State kept Minnesota reeling with a humiliating 26 point blowout. This game was actually close for a half, as both teams were extremely sloppy to start the game. After intermission, the Buckeyes got things going in a big way, while the Gophers just kept on throwing the ball away and missing shots.

The end result was an ugly 0.65 points per possession for Minnesota, which is the Gophers' worst output of the tempo-free era. Think about that for a moment. Minnesota has had some awful teams since 2002-03, including one coached by "all-defense-no-offense" Jim Molinari, and this team, the 2012-13 Gophers, has now produced the worst offensive output.

It's hard to know what to expect from Minnesota going forward. By overall body of work, this is still a good team driven by a solid offense, but it's now been five straight games since the Gophers scored over a point per trip. You wonder if this latest spanking at the hands of the Buckeyes is the death knell of a once promising season, much like Illinois' blowout loss at Nebraska a season ago. There's still time for Tubby Smith to right the ship and secure a tournament bid, but that elusive single digit seed is slipping away quickly.

As for Ohio State, this was a welcome return to the stout defense that had it looking like a Big Ten title contender just a few weeks ago. If the Buckeyes defend, they can hang with anybody, as Deshaun Thomas will usually carry the offense. This night was no different, as Thomas finished with 19 points and no turnovers.

Illinois and Penn State showed that, regardless of the coaches or players involved, these two programs will always play the same game. As usual, it was close and it was ugly, with the Illini making just enough free throws to hold off a late flurry from the Nittany Lions and win by five. For the third straight game, Penn State made shots and hung tough with a good opponent, but Pat Chambers' men still have nothing to show for it. The KenPom odds of the Nittany Lions going 0-18 have climbed to 60 percent, with the game at Northwestern in two weeks being the only realistic possibility to break through.

For Illinois, this is now a five game win streak, during which the Illini forced every opponent to turn it over on 22 percent or more of its possessions. We've maintained that a turnover-focused defense is not the way to go about winning in the Big Ten, but John Groce is making it work for now. At this point, Illinois need only win at home against Nebraska next weekend to lock up a tournament bid, with nine or even ten conference wins still in play. For some, this is a big surprise, but we actually had Illinois pegged at 9-9 in our season preview.

This weekend brings a Sunday-heavy slate, highlighted by Michigan State at Ohio State (3pm CT, CBS). The Buckeyes were able to get healthy against Minnesota, but a win over a good team that isn't on a downward spiral could work wonders come seeding time. The Spartans need this game if they hope to hang on the outskirts of the conference title race in case of an Indiana stumble. Just two weeks and change remain in the regular season–now is the time to tidy up the resume.