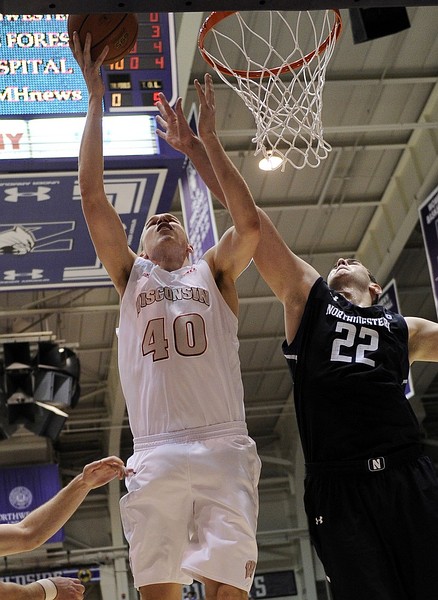 Jared Berggren and Ben Brust each scored 12 points, and No. 19 Wisconsin shut down Northwestern 69-41 on Wednesday night for its fifth win in six games. The balanced Badgers (19-8, 10-4 Big Ten) had five players with at least eight points and held the Wildcats to 29-percent shooting during a very businesslike performance.

Brust, who missed the last two days of practice with a sore left knee, and Berggren also had eight rebounds apiece as Wisconsin enjoyed a 47-22 edge on the boards.

Brust has 9 pts, 8 rebounds… closing in on second-straight double-double.

We're 25 minutes in and #Northwestern has 19 points.

HALFTIME: Traevon Jackson and Jared Berggren combined for a successful first half as No. 19 Wisconsin leads 28-12 over Northwestern. Jackson scored six points, grabbed four rebounds and had three assists, while Berggren added eight points and six rebounds. Wisconsin never trailed and led by as many as 16 points. It also held Northwestern to 20 percent from the field. The Badgers have been effective inside, making 9-of-15 two-point field goals, but have hit only 2-of-11 from three-point range. After already giving up 11 offensive rebounds to Wisconsin, Northwestern will have to keep the Badgers off the boards in the second half.

Yikes. Northwestern scored just 12 (!) points in the first half against Wisconsin. And you thought the #Gophers offense was bad…

Dekker came in for Bruiser for #Badgers and gave up a 3 to Hearn in seconds. He just went to bench.

Shutout brewing in Evanston. This is even uglier in person.

5 minutes have passed. #Northwestern hasn't scored. Trail 9-0. Might be the right game to have a brutal, early deadline.

While I was going through defensive numbers today I noticed that Frank Kaminsky is suddenly rebounding. Good sign for next year.