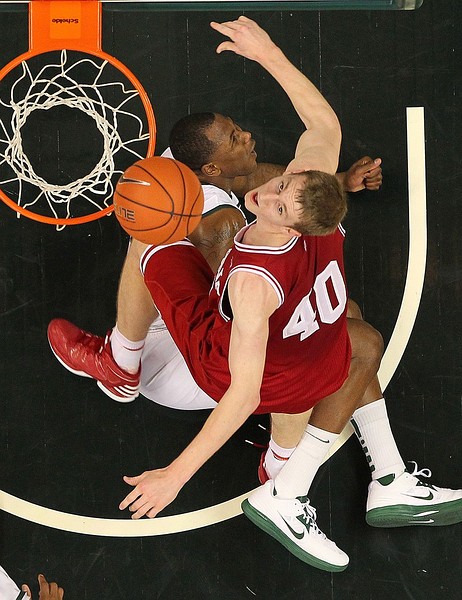 No edition of daily links on this morning could start anywhere but with last night?s big Indiana 72-68 win at Michigan State. The victory ended a miserable 17-game losing skid for the No. 1 Hoosiers at Michigan State. But, more importantly, it put Indiana alone in first place in the Big Ten and in firm control of its destiny. In fact, it will take a big flop by the Hoosiers for them not to win the Big Ten for the first time since 2002 back when IU lost the national title game to Maryland. Games remain at Minnesota; vs. Iowa; vs. Ohio State; at Michigan.

Indianapolis Star columnist Bob Kravitz came away impressed, as did the rest of America, no doubt. And he thinks the Hoosiers are looking good for a deep run in March, too. I?m not going to argue with that.

And here?s what Terry Hutchens of the Indianapolis Star learned during the game. Chief among the lessons is this: Victor Oladipo is really, really good. In fact, I say he?s the leader to be national player of the year.

For Michigan State, it was an opportunity lost to seize the Big Ten lead. This was the Spartans? first home loss of the season-and it?s also a loss that may end up costing them a No. 1 seed in the NCAA tourney. Graham Couch of the Lansing State Journal says the Spartans were unable to handle momentous occasion last night.

Where was point man Keith Appling? It was telling that when a big shot had to be taken late, it was a freshman (Gary Harris) taking it. Crunch time is when upperclassmen and leaders must step up. Oladipo did for Indiana.

Yes, no one argues the notion that Indiana is in the driver?s seat in the Big Ten race. But Wisconsin still has a chance to win the league. It?s a long shot, but the Badgers can dream. Play along with us!

Jeff Potrykus of the Milwaukee Journal Sentinel says the Badgers will need Indiana and Michigan State to stumble twice to drop back to the pack. Even if that happens, the Badgers might have to win out to secure a share of the title.
"If we handle our business, some things could happen," guard Traevon Jackson told Potrykus. "I still think the winner of this league will have four losses just because of the way the schedule works for other teams."

Ohio State says it embarrassed everyone with its 71-49 loss at Wisconsin on Sunday. No one along High Street in Columbus will argue that. What?s the cure? Win the next game, vs. Minnesota tonight.

?We embarrassed our program, we embarrassed the university, and we understand that's something we can't do,? Ohio State sophomore Sam Thompson said. ?So we're going to change that. We were an embarrassment to Ohio State basketball and all the great teams we've put on the floor over the years, and the great games we've had this year. We never want to have a performance like that.?

Doug Lesmerises of the Cleveland Plain Dealer notes that it's hard to get back up when you're down in this rugged league. Ohio State has now lost three of four games, the last by 22 points. More evidence of how tough life is in the Big Ten:

And Minnesota started 15-1 to reach the top 10 in the rankings, then lost four in a row, recovered, and now has lost three of four, including by 21 at Iowa on Sunday.

Such is life in the rugged Big Ten.

That got Lesmerises wondering: What if the Buckeye football team had played a similarly rugged schedule?

Ohio State?s foe tonight-Minnesota-is getting little punch from its bench. And, as you would suspect, that?s an issue.

Marcus Fuller of the St. Paul Pioneer Press says Oto Osenieks, Julian Welch, Maverick Ahanmisi, Andre Ingram and Mo Walker often have done more bad than good off the bench, especially offensively. Ahanmisi and Welch are Minnesota's top bench scorers at 3.7 and 3.1 points a game, respectively (both average 2.5 points in the Big Ten). Ahanmisi has the lowest scoring average for a sixth man in the Big Ten.

Former Michigan star Glen Rice led the Wolverines to their last national title in 1989. And he likes what he sees from this edition of Michigan. But he thinks the team needs to get more production from its bigs. And, he?s correct.

"They depend a little more on the outside game than we did," Rice told Kyle Meinke of Mlive.com. "We had guys who were very capable of taking games over down low and in the mid-range game. So, that could be a difference.

"I do think that will determine whether they win a championship, because you have to establish some kind of inside game."

When Andrew Logue of the Des Moines Register writes something, I listen. In this case, he speculates on what Big Ten divisions may look like if the conference went to 16 teams by adding, say, North Carolina, Georgia Tech or Virginia.

I?ll just say this: The East would be loaded.

With roster limitations caused by NCAA sanctions, Penn State figures to need some of its incoming freshmen to play this fall. Here are five with a good chance to do just that for Bill O?Brien?s squad.

I dare the Big Ten to not name anyone from Indiana (say, Victor Oladipo) the player of the week on Monday.

My take: So funny. But seriously, folks: It has to be Vic, right?

Indiana is best team and Oladipo best player I've watched this season. Hoosiers will be a tough out.

My take: I?ll second that.

Gotta go check my milk carton to see if Keith Appling's picture is on it.

My take: I still haven?t found him.

My take: I had a feeling that when Derrick Nix was popping off about a lack of respect last week, it probably wasn?t a good thing.

Izzo not happy with his team's lack of discipline. "Sometimes you start thinking you're better than you are."

My take: Amen. Let?s see how Michigan State learns from this. March still looms-as do great possibilities for this Spartans team.

Indiana now has to seriously collapse to not win the Big Ten. Basically have a two-game lead now with four games left

My take: At times, it was downright awful last night at Michigan State.

This Big Ten Tournament will be ridiculously fun. Bring it on.

My take: The roof will blow off the United Center! And I can?t wait.

IU game..can't remember a better road win for any team as long as I've been watching B10hoops..might be worst officiated game I've seen tho

My take: This is a colossal statement coming from Double D!