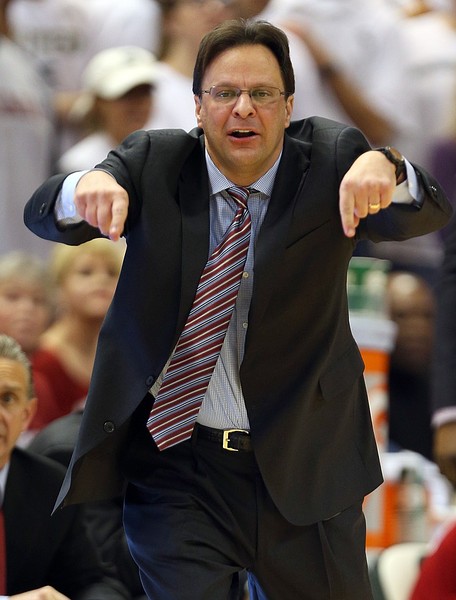 Indiana pulled out a huge road win over Michigan State, thanks largely to the all-around heroics of Victor Oladipo. The surging national player of the year contender made things happen all over the court. On the offensive end, Oladipo was about as efficient as it gets, attacking the tin (he went six for seven on dunks and layups, ridiculous numbers for a guard) while turning it over only once.

[ RELATED: Big Ten Player of the Year: Burke or Oladipo? ]

Scoring 19 points on 11 shots is impressive enough, but Oladipo's defensive effort was even better. He finished with five steals, a block, seven defensive rebounds, and only two fouls. If you want to see excellence at both ends of the court, look no further than Victor Oladipo's performance last night. Oladipo is now squarely in the national player of the year discussion, as he should be.

Oladipo's contributions at the rim should not be overlooked, as his teammates had a tough time finishing inside. Even with Oladipo's six-for-seven, the Hoosiers shot a lowly 46 percent on layups and dunks, thanks largely to the shotblocking prowess of Matt Costello, Adreian Payne, and Denzel Valentine. On unblocked rim shots, Indiana made a more typical 57 percent. For Michigan State, it was the second straight game of big shotblocking totals, as the Spartans swatted 12 Nebraska shots (strangely, all jumpers) the last time out. Oladipo's uncanny ability to finish, paired with the three-point shooting of Jordan Hulls and Christian Watford, was enough to bring home the victory.

The win all but assures Indiana a share of the Big Ten title, and it's increasingly likely that the Hoosiers will win it outright. Including a decimal place for clarity, the projected number of Big Ten wins for the conference's NCAA contenders are shown in the table to the right. Indiana is projected to finish 15-3, a full two games clear of the field. In a conference this strong, that would be a monumental accomplishment. To pull that off in just the fifth season after a complete program implosion is even more incredible. Tom Crean deserves a ton of credit for what he has done rebuilding Indiana basketball, and he probably should get more run in the coach of the year discussion.

For Michigan State, this was a missed opportunity. It's not often that you get a home game that would essentially clinch you a share of the Big Ten title. Coming into this game, the Spartans' offense had been on a real roll, scoring 1.09 points per possession or better in five straight games. That streak came to an end against Indiana because Michigan State's shooting just wasn't accurate enough. The Spartans did manage to get over half of their shots right at the rim, which will nearly always lead to excellent accuracy, but the 52 percent finishing rate (60 percent on unblocked rim shots) wasn't high enough to counteract the poor three-point shooting. A couple more makes from anywhere would have changed the game, but Michigan State came up just short.

Still, the Spartans have surpassed our expectations and remain a dangerous team heading into March. You never expect a team to lose a player the caliber of Draymond Green and not missed a beat, but Michigan State has done just that.

Tonight, it's another Wednesday doubleheader on BTN, starting with the 6pm CT tip of Minnesota at Ohio State. Both of these programs are reeling a bit, having each lost three of their last four, so this will provide a much needed salve for one of them. The most interesting matchup will come when the Gophers have the ball, as their strengths (offensive rebounding and free throws) are the very things that the Buckeyes are best at taking away.

The 8pm CT nightcap pits Wisconsin against Northwestern in Evanston. These are the two slowest teams in the conference, so don't be surprised by a possession count in the mid-50s. In other words, first to 60 wins, if either team gets there. The Badgers remain a darkhorse title contender should Indiana stumble, as four of their remaining five games come against the conference's bottom third. This Wisconsin defense is so good, it's hard to imagine them having been any better with Josh Gasser. That sounds a bit absurd, but there's just no holes in this defense. If the shorthanded Wildcats managed under 0.7 points per trip against Illinois, how in earth are they going to score against the Badgers? Wisconsin could score 55 points and still get a blowout win.