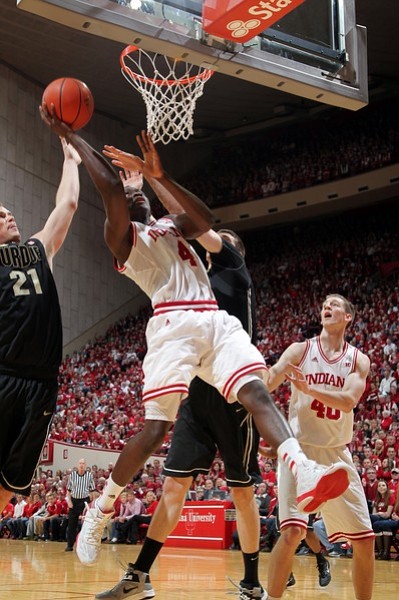 After a less-than-scintillating Sunday of hoops-Who knew Penn State-Michigan would be the best game?–let?s hope Tuesday?s huge Indiana and Michigan State game lives up to the hype. So, I?m gonna jump ahead and start daily links there.

The IU-MSU game figures to be a lot better if Hoosiers star Victor Oladipo is able to play after injuring an ankle in a blowout of Purdue on Saturday. But what if the versatile weapon can?t play for an Indiana team that has lost 17 in a row in the Breslin Center?

If Oladipo is a no-go, Will Sheehey would have to step up, which would mean Maurice Creek and Remy Abell would need to play larger roles off the bench, along with Jeremy Hollowell. But in the end, I have a feeling Oladipo will play on Tuesday night.

NCAA DREAMS: Iowa?s NCAA dreams just may be a reality. Really. The latest brick in the wall was an impressive win over Minnesota yesterday.

The Hawkeyes? first three-game Big Ten winning skein in six years has Mike Hlas of the Cedar Rapids Gazette thinking Iowa may reach the Big Dance. The last time the Hawkeyes won four Big Ten tilts in a row was 2006-which also was the last time they played in the NCAA tourney. I think Iowa needs to go 10-8 in the Big Ten and win at least one game in the Big Ten tourney. And, it?s very doable.

GOPHERS RESUME TAKES HIT: While Iowa celebrated on Sunday, Minnesota was left to ponder its NCAA future after blowing a 16-point lead to the Hawkeyes. Are the Gophers still in?

CBSSports.com bracket guru Jerry Palm says all that Minnesota needs to do is win just two more games to finish with an 8-10 Big Ten record and it should be fine. Oh, and the loss to Iowa wasn?t even the worst of the season for Minnesota, according to Palm. Nope. That came earlier this year to Northwestern.

LOTTERY GOPHER: On the subject of the Gophers, is point man Andre Hollins an NBA lottery pick? It seems some people think so-at least in 2014.

But, golly, the sophomore has been very inconsistent this season.

?The coaching staff talked to me that I need to be more aggressive sometimes, but also make the right decisions,? Hollins told Marcus Fuller of the St. Paul Pioneer Press. ?I?m evolving. There?s certain times I need to be more aggressive. Sometimes I will take a dribble when I have a shot and it might not be there. So it?s just recognizing when I have to shoot. When I?m open they want me to shoot and also create for my teammates.?

And what is it about zone defenses that are so confounding to Minnesota?

SAME OLD, SAME OLD: Amelia Rayno of the Minneapolis Star-Tribune also says the same issues cropped up in the Iowa loss that have for the Gophers for most of the season. It?s maddening.
1. Turnovers
2. Perimeter defense
3. Poor shooting
4. Zone penetration

WELCOME BACK, MICHIGAN GREATS: Michigan brought back roughly 120 players last weekend for a Crisler Center re-dedication ceremony, featuring alums from every decade since the 1960s. And former Wolverine star Campy Russell says he wants the Fab Five welcomed back to the program, says Nick Baumgardner of MLive.com.

Russell says in some private player circles, Chris Webber, Jalen Rose, Juwan Howard, Ray Jackson and Jimmy King are completely embraced. Even when Michigan was going through sanctions stemming from the Ed Martin recruiting scandal, Russell says he and several of his former teammates made it a point to avoid labeling the group as "outcasts."

NEED FOR TOUGHNESS: While on the subject of Michigan, while it ended a two-game losing skid on Sunday vs. Penn State, it?s still looking for ?big boy basketball.?

FLOP CITY: Ohio State played what many felt would be a season-defining game at Wisconsin on Sunday-and it flopped.

While Ohio State struggles, Illinois rolls, taking a fourth win in a row after demolishing Northwestern on Sunday.

ILLINI STREAKING: Mark Tupper of the Decatur Herald-Review says he?s seeing a new level of confidence and competence from a team that couldn?t find either last season. And from the coaching staff, Tupper likes what he has seen as they meet Big Ten teams for a second time. Illinois certainly showed that against Minnesota and it made big adjustments against Northwestern. And I thought this team was headed for a demise similar to last season. Silly me.

FOCUS ON CHICAGO: Loren Tate of the Champaign News-Gazette has seen it all. So, Illinois? push under Mike Thomas to make Chicago an Illini stronghold is nothing new.

Will it work this time? Who knows? But, I like the school?s persistence.

The Wolverines are set at tackle with Taylor Lewan and Michael Schofield. But the interior is a work in progress. Stay tuned, as Michigan looks to replace left guard Ricky Barnum, center Elliott Mealer and right guard Patrick Omameh. None of their replacements gained much meaningful experience last year, and most are underclassmen, so the Wolverines basically are starting over in the middle.

BIGGER AND FASTER NITTANY LIONS: Penn State?s players feel bigger and faster this offseason, but it will take time to determine who will be the leaders.

Gophers led by 16 early and lost by 21 at Iowa? By TWENTY-ONE? #Badgers

My take: We all are amazed.

Have to ask questions about Ohio St's D today after Wisconsin shot season high 53% and beat the Bucks 71-49 in Madison.

My take: If the Buckeyes don?t play good defense, they are a very ordinary team.

My take: (I?m shrugging my shoulders.)

Michigan's 16-0 when Glenn Robinson III scores in double figures, 17-0 when he has at least 5 rebounds.

My take: If you didn?t know how valuable GR3 is to Michigan before, this should make it clear.

Penn State plays at Northwestern on March 7. You can't make me watch.

Look at Iowa's remaining schedule and where it could be seeded in Big Ten tourney, and tell me NCAA tournament isn't well within reach.

#Northwestern had more turnovers (14) than it did field goals (12).

My take: Yes, that game last night vs. Illinois was brutal for the Wildcats. They are just too depleted. What do the basketball gods have against NU?