Big Ten primer: Is it Tuesday night yet? 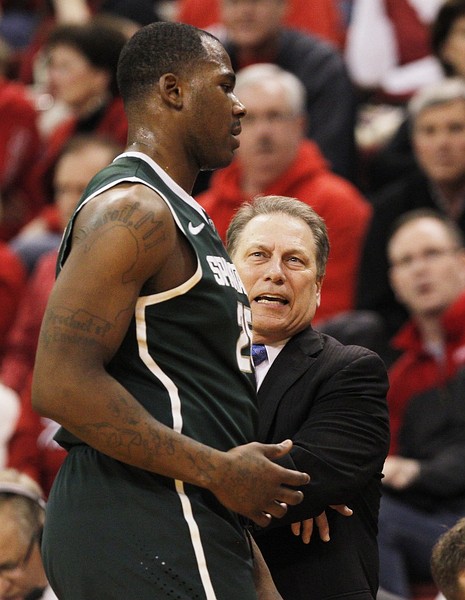 This also is a Titanic week for the Buckeyes, who are in peril of falling from the race after losing three of four. Ohio State has two big home games: Minnesota (18-8; 6-7) and Michigan State.

Iowa also must take care of business at Nebraska to keep its faint NCAA tourney hopes alive. The Hawkeyes (17-9; 6-7) likely need to finish 10-8 in the Big Ten and win at least one game in the Big Ten tourney to stamp its Big Dance ducat.

GAME OF THE WEEK: Indiana at Michigan State, Tuesday. This is the second Tuesday in a row that the Spartans will play host to the biggest game of the week. Michigan State dispatched Michigan in impressive fashion in a battle of top-10 teams last Tuesday, taking a 75-52 decision. The teams each rank in the top 10 and are tied for first place in the Big Ten. The Hoosiers won the first meeting, 75-70, Michigan State?s lone loss in 2013. If Indiana star guard Victor Oladipo plays (ankle), how effective will he be? And it sounds like the Spartans may be without guard Travis Trice and his sweet shot.

DON?T OVERLOOK THIS GAME: Michigan State at Ohio State, Sunday. This is the second tough game in a rugged four-game skein that sees the Spartans play at Michigan and host Wisconsin after traveling to Columbus. Michigan State topped the Buckeyes, 59-56, earlier this season. The Spartans will need to win to stay in Big Ten title hunt. Ohio State has lost three of four games. Michigan State has won five in a row and 11 of 12.

MUST WIN: It goes without saying that Indiana and Michigan State each needs to win when they meet on Tuesday in the Breslin Center. The Spartans are 15-0 at home. Indiana is 5-1 on the road. The Breslin Center has been the Hoosiers? personal house of horrors, as they have lost 17 in a row in the Spartans? home. In the Hoosiers? last road game, they whipped Ohio State, 81-68.

BEST INDIVIDUAL MATCHUP: Indiana?s Victor Oladipo vs. Michigan State?s Gary Harris. It?s experience (Oladipo) vs. youth (Harris) in a key clash that will go a long way in determining which team wins this game. If Harris, the Big Ten?s top freshman, is allowed open looks from the perimeter, he will drill the Hoosiers and open room for the Spartan big men to work. Oladipo has a gimpy ankle but likely will play. But how effective will he be? Oladipo must slow down Harris-and also be his usual dynamic self on the offensive end if Indiana wants to notch its biggest victory of the season. If Oladipo can?t go-or is limited-Will Sheehey must pick up his slack.

UPSET ALERT: Iowa needs to be careful when it plays at Nebraska on Thursday. The Cornhuskers are 9-7 at home and matchup well with the Hawkeyes, who can?t afford to slip in Lincoln if they want to earn their first NCAA bid since 2006. Iowa needs to keep an eye on Dylan Talley and Ray Gallegos. And if Brandon Ubel gets established inside, trouble could brew. After a three-game slump, Devyn Marble has eclipsed double-figures in each of his last three games and needs to stay on a roll for Iowa.

BIG WEEK: Michigan State. The Spartans begin the week with a visit from No. 1 Indiana. And they end it with a trip to Ohio State on Sunday. If Michigan State wins both, it will carry a lot of mojo into a big showdown game at Michigan on March 3.

A LOOK BACK TO LAST WEEK

BIG WINNER: Michigan State. The No. 8 Spartans blasted No. 4 Michigan and fended off Nebraska in Lincoln to remain in first place with Indiana with an 11-2 Big Ten mark. The Spartans played their best game of the season in dispatching the Wolverines, 75-52, showing toughness and a physicality that Michigan couldn?t match. If MSU is hitting shots, it opens the interior for a strong front line at makes the Spartans very difficult to beat.

BIG LOSER: Ohio State. The No. 13 Buckeyes struggled mightily to put away a shorthanded Northwestern team, 69-59, on Thursday night. Despite having just seven healthy scholarship players, Northwestern was tied with Ohio State with just over three minutes left in the game. Then, on Sunday, Ohio State was run off the Kohl Center court by No. 20 Wisconsin, 71-49. The Buckeyes allowed the Badgers to shoot a robust 53 percent. Ohio State begins the week 8-5 in the Big Ten and in fifth place, its league title hopes fading fast.