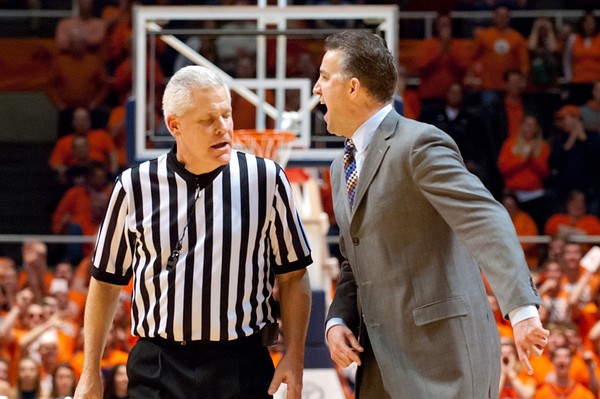 Illinois exorcised some demons in a 20 point blowout of Purdue. The Fighting Illini seniors had never beaten the Boilermakers, but they changed that in emphatic fashion by attacking the offensive glass and limiting turnovers. In all, Illinois attempted 13 more field goals than Purdue, and those extra looks enabled John Groce's team to score 1.20 points per trip despite 29 percent shooting on jumpers. It was Illinois' best output since the win at Gonzaga, and it appears that the Illini of the season's first month have returned.

Illinois also did a good job defensively, especially when it came to stopping A.J. Hammons. The productive 7-footer was usually unable to get touches, and when he did he was frustrated by constant double teams. It was much like the way the Illini defended Trevor Mbakwe in the previous game, and they limited Hammons to six field goal attempts, three turnovers, and just two free throw attempts. The latter statistic was not lost on coach Matt Painter, who got himself ejected with eight minutes remaining after what he perceived as one too many uncalled fouls. Illinois made all four free throws resulting from the two technicals, and the game was effectively over.

Once again, the bright spot offensively for Illinois was D.J. Richardson, who scored 18 points on 11 shots. The senior guard is having the best conference season of his career, and it's not even close.

In the past, Richardson has had a nasty habit of disappearing in conference play, but he's thriving in his final go-round. Richardson has had similar numbers to former Iowa guard Matt Gatens his entire career, and it looks like he is duplicating Gatens' fantastic senior season. Good thing for the Illini, as running mate Brandon Paul is in a bit of a slump. Paul scored three points and fouled out against Purdue, making the big margin all the more impressive.

Illinois is now well positioned to lock up a tournament bid, assuming it can get a road win this Sunday at injury-decimated Northwestern. That win, along with home games against Penn State and Nebraska, would get the Illini to 8-10, which makes their resume a no-brainer given the collection of big wins.

Speaking of Northwestern, the Wildcats went into Columbus last night and somehow hung with Ohio State for 37 minutes. It felt like Bill Carmody was a modern-day MacGruber, making lifesaving inventions out of household materials. Quick! Bring me that Serbian transfer from TCU! Hand me that starting center that weighs 215 pounds! We're gonna get through this!

Unfortunately, the game ended much like a MacGruber sketch, with the Buckeyes holding Northwestern scoreless over the final 3:30, save for a meaningless Tre Demps dunk to put the final margin at 10. It was a valiant effort for a team with only seven scholarship players available, but in the end it was the same old problems plaguing the Wildcats. Northwestern's offense was efficient, but Ohio State scored at will, primarily thanks to rebounding 54 percent of its misses. The Wildcats were a poor rebounding team already, so it isn't surprising they struggled to end possessions with their two best rebounders out.

Minnesota picked up a crucial overtime victory over the Wisconsin Badgers, who have now played four extra periods over the past three games. After winning the previous two, it figures that Bo Ryan's team would lose this one, which was certainly not an ideal advertisement for Big Ten basketball. Both teams shot terribly, and the Gophers' recent tendency to play downtempo was predictably not changed by the Badgers.

Style points aside, a win is a win, and Minnesota badly needed this one. Considering the next three games (at Iowa, at Ohio State, vs Indiana), it's entirely possible that a loss to Wisconsin would have set the Gophers up to enter March at 5-10 in the conference and on a six game skid. Now, it seems like 8-10 is a worst case scenario, so Minnesota is a better than 50/50 bet to lock up an at-large.

Iowa struggled to pick up the road win over Penn State, as the normally inept Nittany Lions scored 1.10 points per trip on the Hawkeyes. If there's one thing Penn State is terrible at, it's shooting, but Pat Chambers' team was on fire last night, hitting 47 percent from three. D.J. Newbill and Jermain Marshall did the damage, combining for 40 points and 12 assists. Needless to say, struggling to beat Penn State is not a positive indicator for Iowa, and it will need to get things sorted out quickly with Minnesota on tap.

Indiana blew the doors off Nebraska in the second half on Wednesday and cruised to a 29 point win. The Hoosiers remain a slight favorite for the Big Ten title, but Michigan State projects only tenths of a win behind. The two front runners meet Tuesday in East Lansing.

This weekend brings a relatively subdued slate for the conference, with only two games pitting tournament-contending teams against each other (Ohio State at Wisconsin, Minnesota at Iowa). With the abundance of fantastic games provided by the conference this season, it feels like a bit of a letdown, but there figures to be no shortage of intriguing play down the stretch. We're just over four weeks from Selection Sunday. Soak it in.