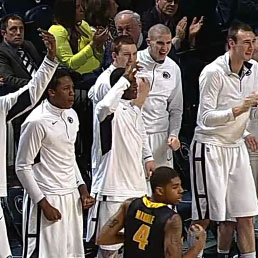 Devyn Marble scored 22 points and Melsahn Basabe blocked a potential game-tying layup with 21 seconds left to help Iowa hold off Penn State 74-72 on Thursday night. Iowa (16-9, 5-7 Big Ten) led by at least 10 twice in the game but couldn't put away the league's last-place team until late.

FINAL: D.J. Newbill scored 26 points and grabbed eight rebounds for Penn State, but it was not enough as Penn State (8-16) fell to Iowa 74-72 Thursday at the Bryce Jordan Center in University Park.

The Nittany Lions had a rough night from the free throw line, shooting 67 percent (10-of-15). Iowa (16-9) nearly blew the 12-point lead that Aaron White gave them on a free throw in the middle of the second half.

The teams traded the lead eight times in the game. Roy Devyn Marble sparked the Hawkeyes, as he scored 22 points, pulled down three rebounds, and handed out four assists in the victory. Mike Gesell had a quality shooting game, nailing 5-of-8 shots from the field and scoring 13 points. Iowa shot 20-of-26 from the free throw line. The Hawkeyes had 15 assists on 24 baskets. Iowa was able to secure 14 offensive boards. The Hawkeyes also got a double-digit performance from Melsahn Basabe (11 points).

Sasa Borovnjak was 6-of-8 from the floor and chipped in 14 points for Penn State. The Nittany Lions shot 8-of-18 from three-point range during the game, good for 44 percent. Penn State also got a solid contribution from Jermaine Marshall (14 points). Iowa outrebounded the Nittany Lions 40-33. With the loss, Penn State extends its losing streak to 12 games.

HALFTIME: Gesell scored 10 points and shot 4-of-6 from the field. Basabe scored eight points and grabbed five rebounds. So far, D.J. Newbill's the Nittany Lions team re hanging in and he has 16 points and three rebounds. The Hawkeyes dominated on the glass in the first half, outrebounding Penn State 23-11.

The Nittany Lions trailed 17-7 when they broke out for a 16-0 run to overtake Iowa and seize a six-point lead. After already giving up nine offensive rebounds to the Hawkeyes, Penn State will have to keep Iowa off the boards in the second half.

D.J. Newbill gets some airtime.

Roy Devyn Marbvle throws it down.