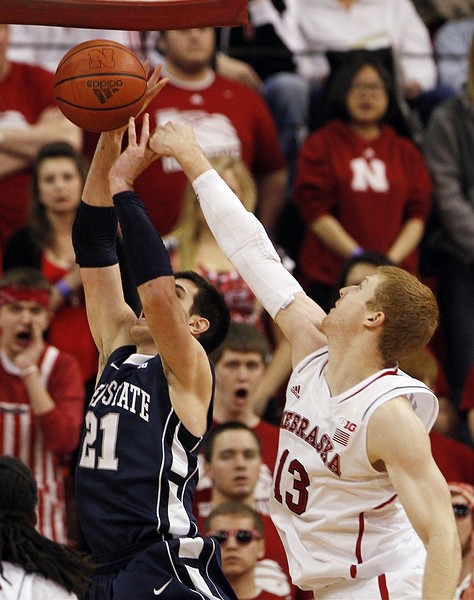 Brandon Ubel had 14 points and Ray Gallegos had 11 for Nebraska, which made 32 of 41 free throws in the foul-plagued game that saw 51 fouls called on the two teams. Penn State hit 23 of 32 free throws.

FINAL: Brandon Ubel scored 14 points and grabbed nine rebounds to lead Nebraska to a 67-53 win over Penn State on Saturday at Bob Devaney Sports Center in Lincoln. Nebraska (12-12) had trouble finding its touch, shooting just 33 percent (15-of-46) from the field, but it shot 32-of-41 from the free-throw line. More Nebraska scoring came from Ray Gallegos (11 points) and Dylan Talley (16 points). Jermaine Marshall had 16 points and hauled in three rebounds for Penn State (8-15), which shot 29 percent (14-of-48). Penn State went 23-of-32 from the charity stripe as a team (72 percent) and also got a double-digit effort from D.J. Newbill (17 points).

HALFTIME: Brandon Ubel and Ray Gallegos each scored eight points to lead Nebraska to a 33-26 halftime lead over Penn State. The Cornhuskers own the advantage due in large part to their ability to get to the foul line (12-of-15). Nebraska distributed the ball well, with seven assists on nine field goals in the first half. It also defended well, limiting Penn State to 20 percent from the field (5-of-25). D.J. Newbill scored six points to pace seven Nittany Lions in the scoring column. Ross Travis put together a strong first 20 minutes, with three points and six rebounds.