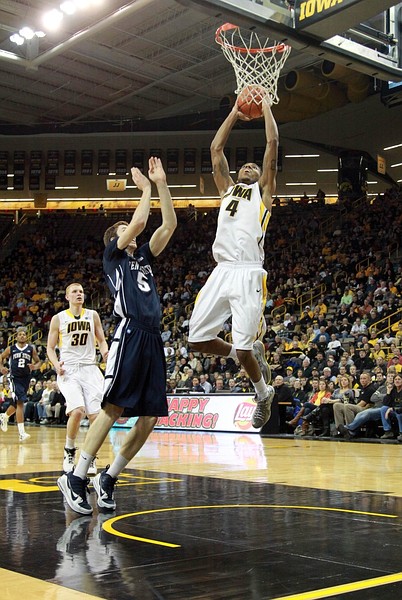 Devyn Marble broke a lengthy slump with 21 points and Iowa beat Northwestern 71-57 on Saturday to snap a two-game losing streak. Josh Oglesby added 10 for the Hawkeyes (15-9, 4-7 Big Ten), who won for just the second time in six games.

Marble, Iowa's second-leading scorer, put together his best scoring night in nearly two months as the Hawkeyes bounced back from a double-overtime loss at Wisconsin on Wednesday. Marble entered play in a staggering spiral, with just 21 baskets on 83 tries in Big Ten play and just two points in his last two games.

FINAL: Devyn Marble scored 21 points, grabbed five rebounds and handed out four assists to help Iowa past Northwestern 71-57 on Saturday at Carver-Hawkeye Arena in Iowa City. A run lasting across the halftime break allowed Iowa (15-9) to grab the advantage. The Hawkeyes trailed 23-21 late in the first, but went on a 13-2 run over the next 5:01 to take a nine-point lead. Iowa hit 48 percent of its field goals (24-of-50 and also got a double-digit effort from Josh Oglesby (10 points). Reggie Hearn had 13 points and grabbed six rebounds and Alex Marcotullio added 10 points for Northwestern (13-11), which shot 35 percent (20-of-57). Iowa won the battle on the boards as well as the game, as it outrebounded the Wildcats 38-30.

Good to see Marble getting some cheers as he heads to the bench. Gotta feel good.

#Hawkeyes Devyn Marble's 15 points mark his most in a #B1G game this season. This guy scored 30 & 27 in b2b games in mid-December.

Those were Josh Oglesby's first free throws since Dec. 1 vs. Texas A&M-Corpus Christi.

loving this unselfish play from Marble. him moving the ball can make a huge difference with this team. his shots will come.

Reggie Hearn is demanding the ball. Love the desperation from the #Northwestern senior.

Woodbury's offensive weakness around the basket is not surprising, this year. Next year? Needs to disappear

HALFTIME: Devyn Marble has nine points on 4-of-5 shooting to lead Iowa to a 29-25 lead over Northwestern at the end of the first half. Neither team has been able to take control of the game as the lead changed hands six times. Melsahn Basabe added six point for Iowa, which made 12 of 21 two-point shots and 1-of-5 from beyond the arc. The Hawkeyes distributed the ball well, with 10 assists on 13 field goals in the first half. Iowa put the clamps on Northwestern's three-point game (1-of-11, nine percent from long range), while the Wildcats shot 56 percent in the first half on two-point field goals. Reggie Hearn scored eight point to lead Northwestern, which also received five points and six rebounds from Jared Swopshire.

Iowa is getting hot, and in front of its home crowd, too. #Northwestern's only chance is with in-game adjustments. Carmody must be on point.

Devyn Marble has been directly responsible for over half of Iowa's points so far today. #hawkeyes

Iowa is the much better team in this contest. They need to show it. Need to put foot on gas and throat.

In first 3.5 minutes, Devyn Marble has as many baskets (2) as he had in four of the last five games. #hawkeyes

Iowa is 11-2 at home this year, losses to Indiana and Michigan State by a combined seven points.

Magic number for @IowaHoops is 60. The #Hawkeyes are 22-0 the last 3 yrs under Fran McCaffery when holding foes to fewer than 60 pts.