No. 8 Michigan State puts away No. 18 Minnesota 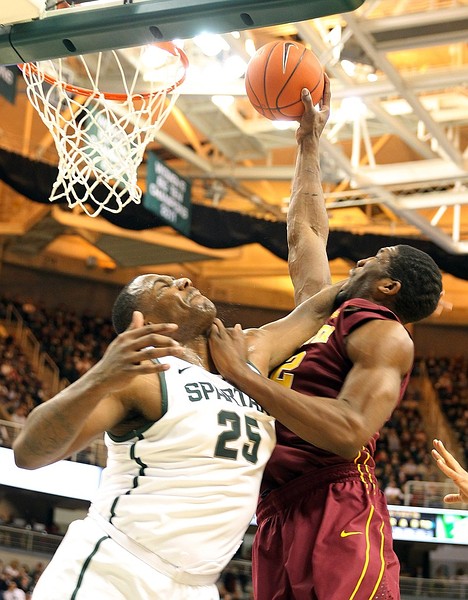 Gary Harris scored 15 points and Keith Appling added 14 points before leaving the game with an injury to help No. 12 Michigan State bounce back from a poor first half to beat No. 18 Minnesota 61-50 Wednesday night.

Appling left the court with 1:17 left, holding his right shoulder after getting tied up with Joe Coleman. He returned to the bench in the final minute.

The Spartans (19-4 8-2 Big Ten) moved into a second-place tie with No. 3 Michigan, whom they host Tuesday night. They picked up their eighth win in nine games since losing the conference opener against the Golden Gophers (17-6, 5-5) on the road.

Branden Dawson gets own rebound, And-1:

Branden Dawson gets steal and slam:

FINAL: When the second frame got underway, No. 8 Michigan State took control of the game en route to capturing a 61-50 victory over No. 18 Minnesota on Wednesday. Trailing 25-20 with 17:19 in the game, Michigan State (19-4) went on a 21-4 run to seize a 12-point advantage in the middle of the second half. Adreian Payne sparked the Spartans, as he had 11 points and pulled down seven rebounds in the victory. Denzel Valentine nailed 3-of-5 shots from the field and scored eight points. Michigan State was hot from long range, hitting 9-of-18 threes for a 50 percent night from beyond the arc. The Spartans also got double-digit games from Keith Appling (14 points) and Gary Harris (15 points). Trevor Mbakwe came through for Minnesota (17-6) with nine points and 14 rebounds

Keith Appling leaving the court with a bad shoulder injury. Looks like possible dislocation. That smarts.

Keith Appling in pain and walking off the court holding his shoulder.

So Harris, Dawson and now Payne have all been hurt in this game? Sounds about right.

Dawson is playing phenomenally defensively this game. Quick hands and really putting pressure on his man.

So Adreian Payne is in the locker room. This team is being held together by a stick of gum and a string.

Harris and Appling now lighting it up in the 2nd frame. They have 24 of MSU's 36 total points and are a combined 7-for-11 from 3-pt range.

Love Michigan State's upside. Sparty can play big or small. Gary Harris is a burgeoning player. Can really stroke it.

The Spartans run some great sets to pop shooters open

Thinking Gary Harris' back is alright considering he's carried the team on it all night.

Last #Spartans game (vs Illinois) , they doubled their shooting in the 2H from 42 percent to 87.5 percent. Dang. #Gophers

HALFTIME: No. 18 Minnesota leads 20-18 at halftime after locking down No. 8 Michigan State's offense, holding the Spartans to six field goals on 24 percent shooting. Each team took a turn in the driver's seat as the lead changed hands five times. Michigan State led 13-6 when the Golden Gophers went on an 8-0 run to take a one-point lead. The Spartans hit 44 percent (4-of-9) of their three-point attempts, two of which came from freshman Gary Harris. Harris and Keith Appling pace Michigan State with six points. Rodney Williams, Joe Coleman and Andre Hollins all scored five points apiece to lead the Golden Gophers, who shot 38 percent.

Not only are these teams having trouble scoring, but this is a slow game. 24 possessions in the first half.

Payne is doing his best Will Gholston impression and pointing out to the ref that he is being held. Also like Gholston, it is to no avail.

Mbakwe takes a bad fall on the fouled shot attempt and is holding his right wrist again. He's in pain.

Gary Harris running like me on the court. Now it looks like the back. Meanwhile, this is on pace to finish somewhere in the mid-30s or so.

Tubby Smith shouted at Minnesota bench: "When are we going to shoot the ball!" after seeing another open shot passed up in ugly game

Everyone watching that Appling breakaway knew he was going to cut back to the center of the lane. Except Hollins, apparently.

How many teams sub out their entire starting five at the same time? It is unique, I will say that. #Gophers

There is not one scorer on the floor for #Gophers that would strike fear in any college coach.

Izzo telling Valentine to stop dribbling behind his back so close to the sideline.

Not a huge crowd here for this one. The Izzone is full but the upper deck is patchy and has many empty seats.

This is a big game for Trevor Mbakwe to boost his draft stock and establish himself as one of the top post players in the league again.