No. 3 Michigan outlasts No. 10 Ohio State in overtime 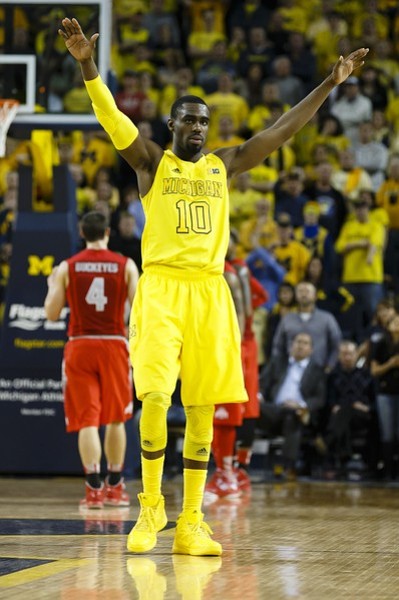 Tim Hardaway Jr. brought Michigan back with a relentless streak of 3-point shooting, then blocked a shot by Aaron Craft in the final seconds of overtime to give the third-ranked Wolverines a 76-74 victory over No. 10 Ohio State on Tuesday night.

Hardaway finished with 23 points, including five straight 3-pointers in the second half. The Wolverines (21-2, 8-2 Big Ten) led by two points when Craft rushed the ball into the frontcourt after a missed Michigan free throw. He got all the way to the basket, but Hardaway was there to smother his last-ditch attempt to tie it.

After scoring at will most of the second half, Ohio State (17-5, 7-3) managed only two points in overtime.

Trey Burke and Glenn Robinson III hook up for alley-oop:

FINAL: No. 3 Michigan outlasted bitter rival and No. 10 Ohio State in a 76-74 overtime victory Tuesday at Crisler Center in Ann Arbor. Five Wolverines scored in double figures, including Tim Hardaway Jr., whose 23 points led the charge to victory. The Wolverines also got double-digit contributions from Glenn Robinson III (10 points), Stauskas (11 points), Mitch McGary (14 points), and Trey Burke (16 points). The teams traded the lead nine times in the game. Michigan hit 47 percent of its field goals (28-of-60). The Wolverines were hot from long range, hitting 14-of-23 threes for a 61 percent night from beyond the arc. Michigan was able to secure 16 offensive boards. LaQuinton Ross scored 16 points, corralled five rebounds, and shot 7-of-10 from the field for Ohio State (17-5) in the game.

HALFTIME: No. 10 Ohio State leads 31-30 over No. 3 Michigan at the half thanks to solid production from Aaron Craft, who has four points and six rebounds. Early on, Michigan used a 12-0 run to blow past the Buckeyes and take a 13-4 lead, however the Buckeyes weathered the storm as eight players entered the scoring column. Deshaun Thomas and LaQuinton Ross led the way with seven points apiece. Ohio State shot 50 percent from the field, while Michigan shot 44 percent, including 45 percent from downtown (5-11). The Wolverines' Mitch McGary had a big first half, with a game-leading 10 points and four rebounds.