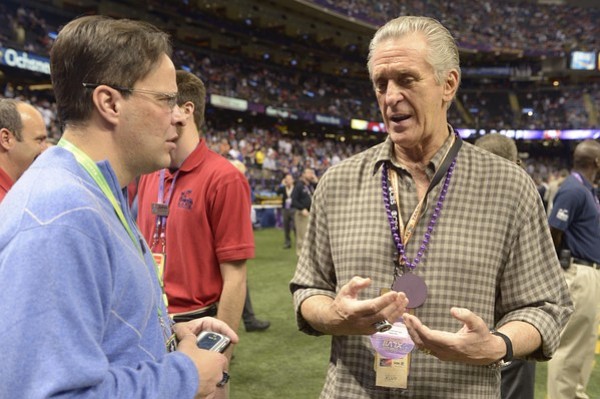 It's been a whirlwind couple of days for Indiana's Tom Crean. His Hoosiers knocked off No. 1 Michigan late Saturday night, and then early Sunday morning, he was off to New Orleans to watch his brothers-in-law, Jim and John Harbaugh, battle in Super Bowl XLVII.

With such a unique set of circumstances, Crean and his in-laws entered the game knowing they would leave with mixed feelings. That rang even truer following John's exciting 34-31 win over Jim.

"It's so unique," Crean said during his weekly Big Ten teleconference Monday. "You've got one family member that you're just overwhelmed with happiness for and you've got another one that it's close to heartbreak that you can feel."

Following the conclusion of the game, though, Crean said he received a powerful text message from Boston Celtics coach Doc Rivers. Crean said it read: "As a parent, you're only as happy as your unhappiest child."

"That was an amazing statement and one of the most profound things I've ever heard," said Crean, who delivered the message to his father-in-law Jack.

Torn feelings aside, Crean is well aware he was part of a very special experience.

"It could be a once-in-a-lifetime thing," he said, "so there was incredible joy in being a part of it and seeing it."

Crean found time for non-family matters, too. He spent time with coaching legends Pat Riley (NBA) and Bill Parcells (NFL), guys he called "two coaching idols." Also, he encountered many bright minds, including NFL commissioner Roger Goddell in the commissioner's box during the power outage, and took advantage of the opportunity.

"You're given a chance to pick brains of leaders, people that are political leaders, business leaders," Crean said. "Even if it's just for a minute, what it does is, it inspires you to think more creatively and to look at things differently."

Now, it's back to reality for Crean. He said he was flying back home today and that he would be watching film on the plane. Indiana plays at struggling Illinois on Thursday night.