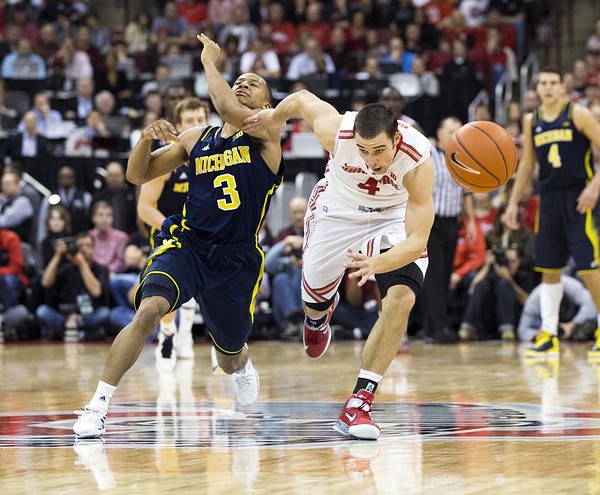 While the Big Ten world continues to buzz from the magical Michigan-Indiana game, it?s time to get ready for the second half of the schedule. And it begins with a big week.

GAME OF WEEK: Ohio State at Michigan, Tuesday. The Buckeyes beat the Wolverines, 56-53, earlier this season in Columbus, so revenge is on the mind of Michigan. Also, the Wolverines want to avoid a two-game losing skid, as they are coming off a loss at Indiana on Saturday night. Will the Buckeyes try to get physical with the Wolverines? Will Michigan?s freshmen have big games? Who on the Wolverines is gonna guard Deshaun Thomas?

DON?T OVERLOOK THIS GAME: Minnesota at Michigan State, Wednesday. Way back on New Year?s Eve, the Spartans lost at Minnesota, dropping a 76-63 decision in the teams' Big Ten opener. Since then, the Spartans and Golden Gophers have gone in opposite directions, with the Spartans going 7-1 and Minnesota going 4-4. The Gophers? bench can?t go scoreless again like it did vs. Iowa in its last game. Michigan State needs point guard Keith Appling to excel.

MUST WIN: Wisconsin must protect its home court when Iowa visits on Wednesday. The Badgers still appear in most mock NCAA brackets, but they have work to do. And beating a still-developing Hawkeyes team that is fighting for its NCAA life is a must. Iowa won two from the Badgers last year and also beat Wisconsin earlier this season, 70-66. It?s time for Wisconsin-2-3 in its last five games–to stop the bleeding vs. the Hawkeyes-1-3 in their last four tilts.

UPSET ALERT: Indiana must be careful when it plays at Illinois on Thursday. While Illinois is 3-8 since its 12-0 start and has lost four consecutive games at home, it's a desperate team that happens to own impressive wins over Butler, which beat Indiana, and Gonzaga. Before you fall over laughing, hear me out. If Brandon Paul and D.J. Richardson are hitting their three-pointers, Tracy Abrams is running the point with aplomb, Nnanna Egwu is productive in the paint and the defense stiffens, Illinois has a chance. That's a lot to ask, but the chance is there.

BIG WEEK: There are three schools in this category: Wisconsin, Michigan and Ohio State. Wisconsin can greatly enhance its NCAA vita this week with home games vs. Iowa on Wednesday and Michigan on Saturday-the only meeting this season between Wisconsin and the Wolverines. A sweep would be impressive. But, at the least, the Badgers need to forge a split.

As for Michigan, which stands one game behind Indiana, a home date vs. rival Ohio State and a visit to Madison make for a huge week.

Ohio State also has a lot on the line, with that trip to Ann Arbor and visit from Indiana on Sunday. Bottom line: This could be a make-or-break week for the Buckeyes? Big Ten title hopes.