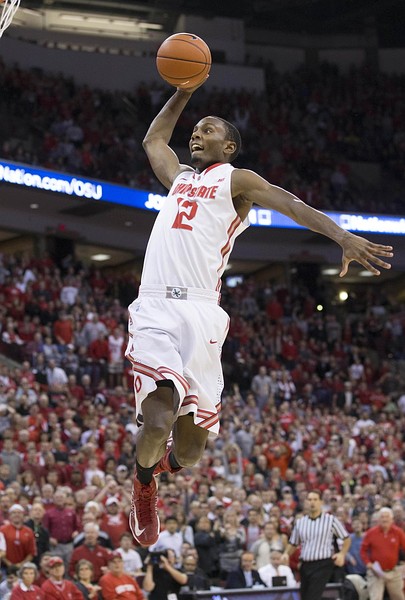 It?s no secret. In fact, it?s well-known to anyone who watches Big Ten hoops: Ohio State?s sophomores need to step up if the Buckeyes want to have a big season. Let?s begin daily links right there, since Ohio State has a big home game tonight vs. Wisconsin.

I?m looking at you, Sam Thompson, Shannon Scott, Amir Williams and LaQuinton Ross. The visit from the always-rugged-on-defense Badgers will be a nice test for that quintet (read Wisconsin Ohio State game preview here). Time to give Deshaun Thomas some consistent scoring help.

Wisconsin sophomore Traevon Jackson is driven by high expectations. Hey, that?s usually the case when you are the son of a former college All-American.

If being Jimmy Jackson's son  isn?t tough enough, Jackson also is following Jordan Taylor as the Badgers? point man, who just happens to be the all-time NCAA leader in assists-to-turnover ratio. Alas, Traevon Jackson is shooting only 34.0 percent from the field overall and 26.7 percent from 3-point range in Big Ten games. He also has more turnovers (14) than assists (12) in league play. But, he?s putting in extra work. Let?s see if it pays off tonight in a homecoming game for the Ohio product.

Meanwhile, Ohio State rival and Wisconsin nemesis Michigan is No. 1 for the first time since the 1992-93 season, the halcyon days of the Fab Five. Where were you back then? This AnnArbor.com writer was in the pep band in 1992-93 and offers fun perspective.

Speaking of the Fab Five, ring leader Jalen Rose hopes he and his buddies will sit courtside for a Wolverines game at some time. Talk about a potential spectacle. But, I hope it happens!

Nebraska has won two of its last three. Really. Up next is a visit to slumping Minnesota tonight, which has lost four in a row. Despite the slump, Gophers? coach Tubby Smith has no plans to bring in a sports psychologists or motivational speaker to help pull his team out of the funk.

Somehow, this team still is ranked No. 23 in the AP poll after a 15-1 start has melted into 15-5 (3-4 Big Ten). Lee Barfknecht of the Omaha World-Herald says the Gophers aren?t so golden anymore. And, he? correct.

It?s no coincidence that as Adreian Payne has notched up his game, Michigan State has gotten better, too.

In fact, Payne is showing signs of possessing an NBA-style game on the offensive end. He is extending his range to three-point territory while displaying a mid-range game along with his usual deft skills in the lane. The guy is just playing lights out! Dare I say he?s the best big man in the Big Ten?

Time may be running out on Iowa?s hopes of earning an NCAA bid. That loss at Purdue on Sunday? It was a killer.

Fran McCaffrey?s offense-first system is fun. And the defense is getting better. But Iowa lacks a true go-to guy-Devyn Marble, where are you?–and the shooting has been woeful in Big Ten action. The Hawkeyes need to win seven of their last 11 games just to get to .500. Hmmm. Not likely.

Want more Iowa? Check out this podcast from Scott Dochterman and Marc Morehouse of the Cedar Rapids Gazette. The dynamic duo discusses the Hawkeyes? shooting woes, recruiting and that tough loss at Purdue.

Brian Rosenthal of the Lincoln Journal-Star offers up his weekly Big Ten power rankings. Michigan is No. 1; Indiana is No. 2. Oh, they meet this Saturday in Bloomington.

Illinois has had several issues crop up during its slump after a quick start that surprised the nation. Among the most recent issues has been a leaky defense.

The great Mike Carmin of the Lafayette Journal-Courier sat down with Purdue A.D. Morgan Burke to discuss the future of the Big Ten and how a 14-team league may look.

Burke repeats the notion that geography will play a big role in drawing up new divisions. Carmin says looking at the league?s footprint, putting Ohio State, Michigan, Michigan State, Penn State, Rutgers and Maryland in the East is one idea. Wisconsin, Minnesota, Iowa and Nebraska would fit in the West. That leaves Purdue, Indiana, Illinois and Northwestern capable of going in either direction.

Braylon Heard, if he's gone gone, would be missed. Asks a lot of Terrell Newby. #huskers

My take: No doubt. The Huskers could use him 2013. But there is good depth at running back and two hot-shot recruits are set to sign in February.

Beilein on radio show: Jordan Morgan does not have a break in his ankle, more known in next few days

My take: This is good news, though Michigan?s other big men picked up the slack in the win at Illinois on Sunday.

Beilein:Our goal at Michigan is to be No. 1 in the Big Ten. When you achieve that honor, you will have a chance at the National Championship

My take: Well, the Wolverines are on their way.

Mbakwe said his wrist really bothered him Sunday when he shot the ball. "But today it was better; I really didn't mind it as much." #Gophers

My take: The Gophers need Mbakwe to be healthy to help pull the team out of this four-game slump. Is there a tougher player in the Big Ten? Nope.

Trevor Mbakwe said the team has put a new emphasis on lots of screening in the halfcourt since Saturday. #Gophers

Losing a key recruit to UCONN wouldn't look as bad if the sport were men's or women's basketball. Football is a different story.

My take: Yes, that hurts.

Although Dave Joyner said Virginia asked out of 2013 game, outlets in Virginia reported that #PennState asked out. Regardless, game's off.

My take: Does it really matter? Bottom line: The game is off. And that?s too bad.

If #B1G does schedule 10 league games in future, are we headed toward 13 regular season games?

My take: I could perhaps see this happening.

Many excited Buckeyes in the Schott tonight-including me! Ready for the men?s basketball game against Wisconsin.

My take: Oopsie. This was tweeted on Monday. The game is tonight.