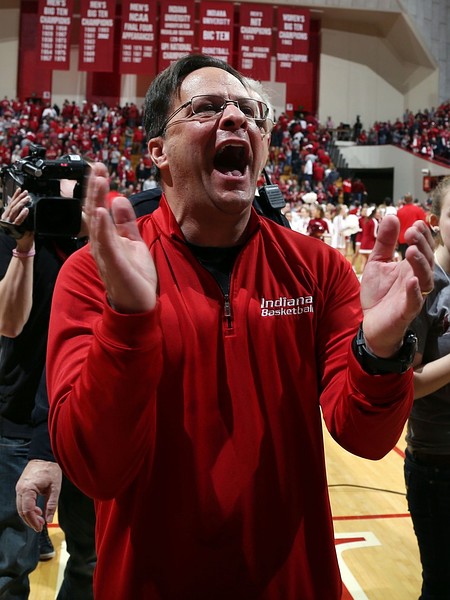 This is a nice week that is anchored by a Titanic prime-time clash on Saturday: No. 1 Michigan at No. 3 Indiana, which began the season No. 1. This should be a battle of first-place teams, with the winner in the driver?s seat to win the Big Ten.

There are some other tantalizing matchups, including Wisconsin at No. 11 Ohio State, Indiana at Purdue, Iowa at No. 23 Minnesota, Illinois at No. 13 Michigan State and Wisconsin at Illinois.

There is nothing better than a Purdue-Indiana hoop game in late January to heat up your house. You just know the Boilermakers would love to damage the Hoosiers? Big Ten championship hopes.

Game of the week: Michigan at Indiana, Saturday. This could be a de facto Big Ten title game between two Final Four teams. At the least, it will go a long way in determining who will win the conference in a battle between two teams tied for the league lead. The freshly minted No. 1 Wolverines? lone loss has come on the road-at Ohio State. The No. 3 Hoosiers have stumbled at home once, falling to Wisconsin. This is the start of monster stretch for Michigan that has it playing Ohio State and then visiting Wisconsin and Michigan State.

Don?t overlook this game: Wisconsin at Ohio State, Tuesday. The Badgers snapped out of a two-game funk with an ugly home win over Minnesota on Saturday. (Did Traevon Jackson get that game-winning shot off in time?) Wisconsin is usually in every game because it limits turnovers and plays good defense, but its shooting must improve if the Badgers want to win this game. The Buckeyes haven?t lost a league game at home – they even sent rival Michigan to its lone loss – and they need to play fast and score in transition. Aaron Craft could be very disruptive to inexperienced Badger guards Jackson and George Marshall.

Individual matchup to watch: The Michigan at Indiana game drips with great clashes, including Trey Burke vs. Yogi Ferrell. But how about Indiana?s Victor Oladipo vs. Michigan?s Glenn Robinson III? Or, Oladipo also may be matched up with Tim Hardaway Jr. Regardless, it will be fun to watch Oladipo vs. both of those Wolverines. Oladipo is the best defensive player in the Big Ten-yes, better than Aaron Craft–and has been the Hoosiers? best player all season. (Go back and watch Sunday?s Michigan State game.) His defensive acumen will be put to the test vs. GR3 and Hardaway, two sweet-shooting wing players who can take over a game.

Must win: Indiana needs to find a way to win at Purdue on Wednesday and can?t afford to look ahead to the Michigan game on Saturday night in Bloomington. The Hoosiers have won the last two meetings, including a convincing 78-61 win in West Lafayette last season. Indiana has a plethora of offensive options, including the likes of Cody Zeller, Victor Oladipo, Yogi Ferrell, Christian Watford. Purdue? Terone Johnson leads the Boilermakers with a 13.3-point average, the lowest for any player who paces his team in scoring. If Purdue can?t slow the pace and get into the paint, it has little chance to pull the big upset given its erratic shooting.

Upset alert: Iowa at Minnesota, Sunday. Nothing is working for the Golden Gophers. Tubby Smith even shaved his mustache; to no avail. The Gophers have lost four in a row and are fading fast from the Big Ten title conversation. Minnesota needs more production from its bench, must limit turnovers and get Rodney Williams on track. If those things don?t happen, the young-but-dangerous Hawkeyes could invade Williams Arena and leave with a victory.

Big week: This week could make or break Wisconsin?s Big Ten title hopes. It begins with a trip to rising Ohio State on Tuesday and ends with a visit to desperate Illinois on Sunday. For the Badgers to make it a successful week, they will need to shoot better. In the last three games, Wisconsin shot 37 percent vs. Minnesota; 29 percent vs. Michigan State; 43 percent vs. Iowa.

It?s also a big week for Illinois, which plays at Michigan State on Thursday before welcoming the aforementioned Badgers on Sunday. If the Fighting Illini can somehow pull off a sweep, it would remain viable in the hunt for an NCAA bid.

And keep an eye on Indiana, which plays at Purdue and vs. Michigan.