Purdue takes down Iowa in overtime 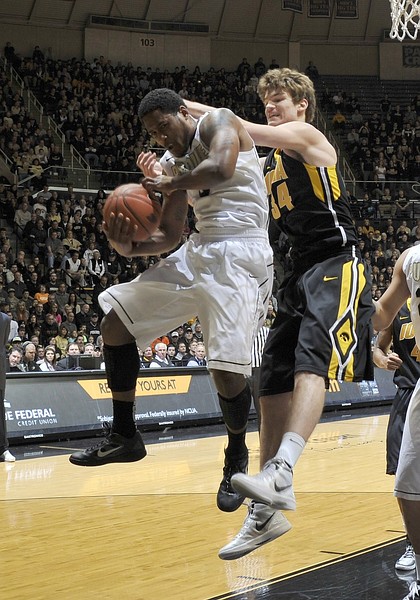 Terone Johnson had 17 points and 12 rebounds and Ronnie Johnson scored 15 to lead Purdue to a 65-62 victory over Iowa on Sunday. Donnie Hale had 12 points and five rebounds and D.J. Byrd had 10 points and seven rebounds for the Boilermakers (11-9, 4-3 Big Ten), who have won four of their last five.

How'd that go in?! Melsahn Basabe And-1:

Terone Johnson gets fancy on a transition layup:

FINAL: Purdue trailed down the stretch Sunday, but took the lead for good on a Ronnie Johnson bucket in overtime to claim a 65-62 win over Iowa at Mackey Arena in West Lafayette. Terone Johnson picked up the offensive burden for Purdue (11-9), finishing with 17 points, 12 rebounds, and three assists. Iowa (13-7) struggled shooting the ball in the game, going 31 percent (19-of-61) from the field and 70 percent (19-of-27) from the charity stripe. Donnie Hale scored 12 points for Purdue, which also got double-digit games from D.J. Byrd (10 points) and Johnson (15 points). Mike Gesell scored 18 points, corralled four rebounds, and knocked down 6-of-11 shot attempts for Iowa.

HALFTIME: Purdue held Iowa's offense to just four first-half field goals, and the Boilermakers lead 19-16 at halftime. Purdue, which owns a 27-19 rebound margin, never trailed in the first half and led by as many as eight points. The game was knotted up when the Hawkeyes went 3:09 without scoring, allowing Purdue to take a 10-2 lead with 14:25 left in the first half. Terone Johnson leads all scorers with seven points, while A.J. Hammons has four points and eight rebounds. Devyn Marble scored five points to lead the Hawkeyes.