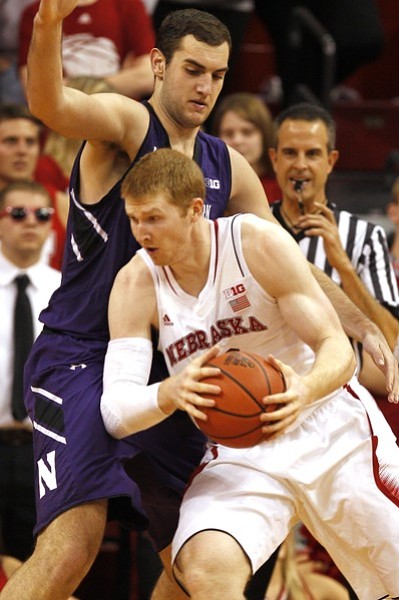 Dylan Talley scored 20 points and Ray Gallegos broke out of his 3-point shooting slump in the second half to lead Nebraska to a 64-49 victory over Northwestern on Saturday. The Cornhuskers (11-10, 2-6 Big Ten) won for the first time in four conference home games.

Brandon Ubel had 14 points and 12 rebounds, and Gallegos added 11 points.

Dave Sobolewski matched his season high with 21 points and Jared Swopshire had 11 to pace the Wildcats (12-9, 3-5), who were coming off a seven-point win over No. 12 Minnesota.

Brandon Ubel throws it down:

FINAL: Nebraska held Northwestern to 18-of-55 shooting (33 percent), as defense led the Cornhuskers to a 64-49 victory on Saturday at Bob Devaney Sports Center in Lincoln. Dylan Talley carried the offensive load for the Cornhuskers, finishing with 20 points, eight rebounds, and 8-of-14 shooting from the field. Brandon Ubel had a double-double (14 points, 12 rebounds) for the Cornhuskers, who secured 17 offensive rebounds, and Ray Gallegos chipped in 12 points. Jared Swopshire contributed 11 points and yanked down 15 rebounds for the Wildcats in the game. Northwestern also got a double-digit performance from Dave Sobolewski (21 points).

HALFTIME: While Dave Sobolewski had a strong first half, with 10 points and five rebounds, Northwestern trails Nebraska 23-22 at the half. Trailing 11-7, the Cornhuskers used an 8-0 run to blow past the Wildcats and take a four-point lead. Nebraska's Dylan Talley scored 10 points to pace the Huskers, who had eight offensive rebounds in the first half. Northwestern's leading scorer, Reggie Hearn, has been contained by the Cornhuskers thus far. With two points, the senior will need a strong second half to get to his usual level of production (14.4 points per game).