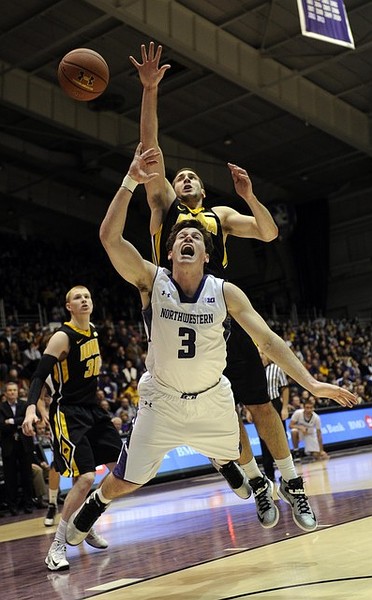 Fortunes continue to rise and fall in the Big Ten race, which drips with intrigue. No game this weekend is more fascinating than Michigan State?s visit to Indiana on Sunday. The Hoosiers already have lost once at home to Wisconsin. And that loss isn?t looking too good in hindsight. Indiana surely can?t afford another slip, right? But here come the Spartans, winners of six in a row and the hottest team in the Big Ten.

Minnesota-losers of three in a row-and Wisconsin-losers of two in a row-will play a ?stop the bleeding? game in Madison on Saturday. And keep an eye on Iowa?s trip to Purdue, a game which is all about mid-level Big Ten teams trying to climb the food chain. The winner can keep dreaming about the Big Dance-for at least another day in a conference where an 8-10 league mark may get you into the NCAA tourney.

Here?s a look back and forward in the Big Ten.

THREE STOCKS TO BUY
1. Michigan. The Wolverines may be primed to move up to No. 1 with a win at Illinois over the weekend. Why not? Michigan is a deep and athletic team that comes at foes in waves. There?s Burke, Hardaway, Robinson, Stauskas, Morgan, McGary ?
2. Michigan State. This is the hottest team in the Big Ten, ripping of six victories in a row after opening league play with a loss at Minnesota. Adreian Payne is on fire, but the real key is point man Keith Appling, a freshly-minted captain who is taking ownership of the team.
3. Northwestern. The Wildcats are coming off a huge home victory over No. 14 Minnesota. Last week, Northwestern dumped Illinois in Champaign. Imagine where this squad would be if Drew Crawford (Injury) and JerShon Cobb (suspension) were on the team?

THREE STOCKS TO SELL
1. Minnesota. The Golden Gophers have gone from legit Big Ten contenders to suspect. That?s what three losses in a row will do, with the defeat at Northwestern being especially tough. Tubby Smith called out his players after the Michigan loss last Saturday-and they didn?t respond. Is this rock bottom?
2. Wisconsin. That 4-0 start has vaporized into a 4-2 reality after losses at Iowa and at home to Michigan State. The Badgers need to regain their shooting touch from the arc and free-throw line. This team is too well-coached to slump for long.
3. Nebraska. The win at Penn State may have teased some of us. But Illinois smacked the Cornhuskers with the reality of a 20-point loss this week. Still, Tim Miles is maximizing the talent on this roster and seemingly has things pointed in the right direction.

THREE THINGS I LEARNED
1. It looks like a four-team race between Michigan, Michigan State, Indiana and Ohio State. Of that quartet, the Buckeyes appear to be the shakiest. The production in the paint is spotty. And that continues to put too much pressure on others. The point production outside of Deshaun Thomas is too inconsistent, as well. Will this ever get solved?
2. For Indiana to be great, Cody Zeller needs to command the ball and become more of a presence. How does the big sophomore have just two points in a win vs. Penn State? Seems like he should be averaging 20 points and 10 rebounds, doesn?t it? Zeller also needs to rebound and defend with more ferocity. Is this nit-picking? Perhaps. But to whom much is given, much is expected.
3. Andre Hollins needs to snap out of it, or Minnesota is in big trouble. During the Golden Gophers? three-game slump, he has 11 assists and 13 turnovers, including a career-high seven in the loss at Northwestern. In the last two games, Hollins has hit only 7-of-21 shots and scored 19 points. He?s better than this. Don?t even get me started on Rodney Williams.

THREE IMPRESSIVE WINS
1. Northwestern 55, Minnesota 48. The Wildcats won despite getting outrebounded, 45-31, and hitting just 17 of 32 free throws. Why? Because Minnesota couldn't hit shots, whether the Gophers were taking layups, jumpers or free throws. That NU 1-3-1 zone tied Minnesota into a knot in the second half.
2. Michigan State 49, Wisconsin 47. It?s difficult to waltz into the Kohl Center and come away with a victory. But the Spartans have now done it two times in a row. This was a typical grind-it-out Michigan State victory highlighted by gritty defense and tough rebounding. And Keith Appling continues to take his game to another level, notching 19 points.
3. Iowa 70, Wisconsin 66. The Hawkeyes protected their home court with a nice win last Saturday. Aaron White played like a man possessed, scoring 17 points and grabbing seven rebounds, as the Hawkeyes raced to a 34-18 halftime lead and hung on. This is a young Iowa team with so much promise.

THREE GAMES TO LOOK FORWARD TO
1. Michigan State at Indiana, Sunday. It doesn?t get much better than this. The Spartans are the hottest team in the Big Ten, winners of six in a row. Michigan State has shown it can win on the road (Wisconsin), while Indiana already has stumbled at home (Wisconsin). Christian Watford needs to come ready to play for the Hoosiers-or else.
2. Wisconsin at Ohio State, Tuesday. The Buckeyes are still in the midst of competing for a fourth Big Ten title in a row. The Badgers have work to do to get back into the race. How will inexperienced Wisconsin point guards Traevon Jackson and George Marshall deal with the defensive pressure that Aaron Craft will apply?
3. Iowa at Purdue, Sunday. A battle between two mid-level Big Ten teams trying to climb over each other. Keep an eye on the battle between two talented freshmen big men: The Hawkeyes Adam Woodbury and the Boilermakers? A.J. Hammons. The freshman point guard battle between Iowa?s Mike Gesell and Purdue?s Ronnie Johnson also will be good. This will be a huge game in determining the postseason fates of each squad.