Today's links: Will Michigan jump up? 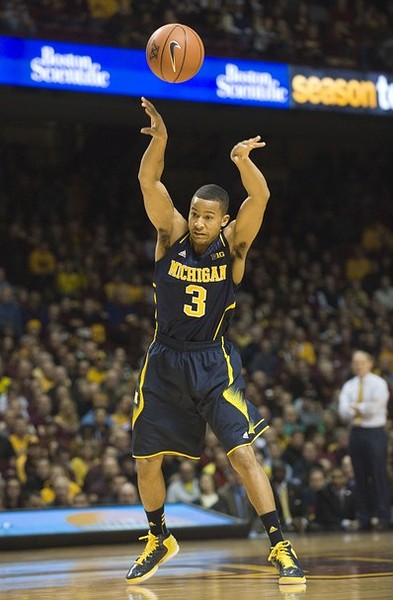 With top-ranked Duke going down hard, and I mean hard, last night against the Miami Hurricanes, the No. 1 ranking in the AP Poll may be there for the taking for AP No. 2 Michigan if it beats Purdue at home tonight and then prevails at Illinois on Sunday. Right now, Michigan is No. 3 in the Coaches Poll behind Duke and Kansas.

So, I?m gonna begin daily links there, America. If that isn?t motivation enough for the Wolverines tonight, then last year?s loss on Senior Day to the Boilermakers should fuel Michigan?s fire.

By the way, John Beilein is 2-6 vs. Purdue since arriving in Ann Arbor for the 2007-08 season. And this will be Glenn Robinson III?s first game vs. this dad?s school. Kinda cool. I wonder if Big Dog will be there.

Much has been made about the strength of the Big Ten this season. And, it?s deserved, with five teams ranked in the top 14 of the most recent AP poll. All of that praise and all of those lofty rankings has put some pressure on the league to deliver a national title, something the Big Ten hasn?t produced since-are you ready for this?-the 1999-2000 season when Michigan State turned the trick.

You probably can scratch Minnesota from the ?national title hopefuls? list. The loss last night at Northwestern makes it three defeats in a row for Minnesota, which seems to be coming unhinged.

Losing to Indiana and Michigan is one thing. But a loss to Northwestern? It was demoralizing last night and removed the Golden Gophers from the Big Ten title conversations-at least for now. Looks like Tubby Smith shouldn?t have called out the players after that Michigan loss last Thursday. It?s backfiring.

"We have a tendency to just take ourselves out of the game with our attitude," Smith told Marcus Fuller of the St. Paul Pioneer Press. "I'm at a loss; I thought we had corrected some things. We came back against Michigan in the second half. But there were two second halves where we've been terrible. It's as simple as that."

And to think that this was supposed to be Smith?s best team yet. Now? (That?s your cue to shrug your shoulders.) Up next: a game at Wisconsin on Saturday.

Wisconsin can relate to Minnesota?s woes, as the Badgers have lost two in a row, including a home loss to Michigan State on Tuesday. One of Wisconsin?s big issues during its slump: They rely too much on the three-pointer.

Indiana had to play Penn State last night. It said so on the schedule. So, the Hoosiers obliged and-as everyone in the galaxy expected–Indiana dominated, 72-49. And in the process, Cody Zeller showed he?s ready for the next level, at least in the eyes of an NBA exec that Bob Kravitz of the Indianapolis Star talked to.

The exec came away with some interesting insights. Zeller needs to become better on the boards and stronger defensively. He also needs to develop a mind-set that he wants to dominate. "Ya gotta wanna," as Coach Spack would always tell me.

Michigan State is good, if you didn?t already know that, as it sits atop the Big Ten standings. What does it mean? The Spartans (17-3 overall, 6-1 in the Big Ten) no longer can hide from their gaudy record.

?I?m not afraid of being 17-3 and saying we?re good,? Tom Izzo said Tuesday night after a big win at Wisconsin. ?I think we?re still grinding it out, but what I?m starting to like is the practices, the shoot-arounds, the meetings - we?re just getting better, we?re growing up a little bit. We?re really starting to bond together.?

So, who is gonna win the Big Ten? Michigan State? Michigan? Indiana? Ohio State? It?s gonna be fascinating. The Spartans? trip to Indiana this Sunday will help answer that question-at least a bit. Oh, and Michigan plays at Michigan State on Feb. 12 while Michigan State comes to Ann Arbor on March 2.

Illinois? win at Nebraska earlier this week was nice. But Loren Tate of the Champaign News-Gazette says there?s still work to do. Yes, the defense looked good-finally. But the Illini fouled too much. And Brandon Paul needs to play better at the point, while Tyler Griffey needs to break out of 0-for-17 slump from beyond the arc. Still, a win is a win for an Illinois team that probably needs to finish 8-10 in Big Ten play to make the Big Dance.

Every football team in America is chasing Alabama, winners of the last two BCS titles and three of the last four. The Crimson Tide are the gold standard. Who can stop the Bama dominance in 2013? Perhaps Ohio State. At least that?s what Steven Lassan of Athlon Sports opines.

It?s never too early to think about next season, right? Right?! That?s why Bob Flounders of the Harrisburg Patriot-News is telling us which Penn State players have the mettle and material to be captains.

Whoevers fills the role-John Urschel, Glenn Carson, Malcolm Willis–can?t possibly be as good of a leader as departing linebacker Michael Mauti, who reportedly has sent handwritten letters to NFL general managers expressing his love and devotion to football.

I don?t need a letter to know that. Just pop in the VHS tape ? or DVD ? or digital file.

Exactly when did Denard Robinson know he wasn?t an NFL quarterback? Well, the answer is all right here.

Turns out, it was after that elbow injury suffered at Nebraska this past season, says Kyle Meinke of MLive.com. But, why is Robinson opting to try to play receiver instead of running back at the Senior Bowl?

"I wanted to play receiver, and I think it?s a better fit," said Robinson, who at 196 pounds likely doesn't have the size to hold up as a full-time tailback says Meinke. "I thought I was a natural. I've been playing football my whole life, and thought I could play receiver."

?I think there is an expectation that there will be a backlash,? Vice Chair of the Athletic Council Antoinette Miranda said. ?(But) we do know that people on Stubhub (a secondary ticket market) pay way more than $175 for a ticket.?

This is what they call ?rationalization.? Hope your wallet is fat, Brutus.

Here is your obligatory Jim Harbaugh story for the day. This time, we take you back to his pee-wee football days in Ann Arbor. Isn?t that cute? Too bad they didn?t have juice boxes in the 1970s. I bet Little Jimmy would have liked Tropical Punch flavor. Or maybe not.

Kohl Center rims, beware: Minnesota was 7-of-17 from the FT line tonight. UW was 7-of-18 on Tuesday night. Yikes.

My take: Yes, the Saturday meeting between the Gophers and Badgers could be hard on the rims. All together now: CLANK!

And by the way, Duke is NOT the No. 1 team in the land. Best team I've seen so far? Florida. #Badgers

My take: Florida? Really? What about Michigan?

I'm not saying Minnesota's bad, guys. Just don't think Gophers are top 3 in the league. I've been wrong before, obviously.

My take: No, you are correct, Nick.

My take: Yes, the Spartans? loss at Miami (Fla.) earlier this season doesn?t look so bad. I love hindsight. And so does Tom Izzo.

So if Michigan takes care of Purdue tomorrow, it will have some extra motivation on Sunday vs. #illini. Playing for #1 after Duke loss

My take: Michigan can see the No. 1 ranking. It?s close. The Wolverines almost got there earlier this season before losing at Ohio State.

#Gophers need to bounce back at Wisconsin or they very well could go from No. 12 to dropping out of top 25. Been there nine straight weeks.

My take: That game in Madison is huge-for both teams, actually. Wisconsin can?t afford a second home loss in a row after falling to Michigan State on Tuesday in the Kohl Center.

Tubby was pretty critical of Andre Hollins, who had seven turnovers: "He just looked like he just panicked. He was just scared." #Gophers

Watching IU film a couple things..if Zeller and Watford are going to have NBA careers the both have to go up stronger/finish thru contact

My take: In other words, get tougher.