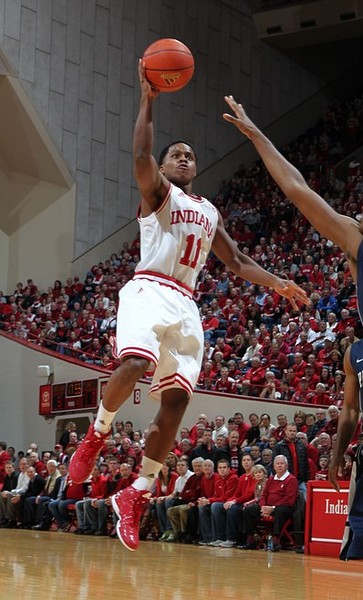 Victor Oladipo scored 19 points, and Yogi Ferrell added a season-high 15 to help No. 8 Indiana rout Penn State 72-49 on Wednesday night. The Hoosiers (17-2, 5-1 Big Ten) survived a sluggish shooting first half with strong defense and used a fast second-half start to reassert their dominance in this series that has included only two home losses for Indiana..

Will Sheehey added 12 points for the Hoosiers, who matched a season-high by making 11 3s in a game.

D.J. Newbill had 18 points and Jermaine Marshall finished with 12 to lead Penn State (8-11, 0-7), which has lost seven straight overall and 12 straight on the road in league play.

Yogi Ferrell drives for nice And-1:

D.J. Newbill gets another transition flush:

FINAL: No. 8 Indiana used stingy defense to defeat Penn State 72-49 on Wednesday at Assembly Hall. The Hoosiers (17-2) held Penn State (8-11) to 33 percent shooting from the field. Victor Oladipo helped lead the Hoosiers to victory, with 19 points, six rebounds, five assists, and 4-of-7 shooting from the field. Kevin Ferrell was 6-of-7 from the floor and chipped in a career-high 15 points for Indiana. The Hoosiers were hot from long range, hitting 11-of-20 threes for a 55 percent clip. Indiana, however, only went 21-of-37 from the charity stripe as a team (57 percent). D.J. Newbill contributed 18 points and hauled in seven rebounds for the Nittany Lions. Penn State also got a double-digit game from Jermaine Marshall (12 points).

HALFTIME: No. 8 Indiana held Penn State's offense to just eight first-half field goals, and the Hoosiers lead 33-19 at halftime. The rebounding edge belongs with Indiana, by a 24-18 margin on the boards. The Hoosiers, who never trailed and led by as many as 15 points, hit 42 percent (5-of-12) of their three-point attempts and registered seven assists on 10 baskets. The Hoosiers also applied the pressure in the first half, earning second-chance opportunities with nine offensive rebounds, to just four for the Nittany Lions. Penn State's Jermaine Marshall led all scorers with nine points, while Will Sheehey broke out of his slump to lead Indiana with eight points. Victor Oladipo and Yogi Ferrell each chipped in with seven points.