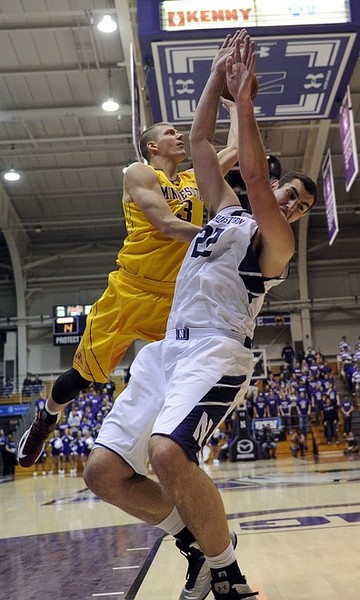 Jared Swopshire scored 16 points to lead Northwestern to a 55-48 victory over No. 14 Minnesota on Wednesday night. In a game where baskets were hard to come by at times, the Wildcats (12-8, 3-4 Big Ten) made just enough shots down the stretch to beat a ranked opponent for the second time in three games while sending the Gophers (15-4, 3-3) to their third straight loss.

Alex Marcotullio made a 3-pointer midway through the second half to give Northwestern a one-point lead and start the decisive 13-2 run.

Reggie Hearn scored 13 points after averaging 21 in the previous two games. Tre Demps added 10 points, and the Wildcats shook off a loss to Indiana and took out another ranked team to go with their victory over then-No. 23 Illinois last week.

Trevor Mbakwe with the left-handed tip-in:

Everyone forgot about Mike Turner on this dunk:

Ladies and gentlemen, Jared Swopshire right into your living room:

FINAL: Northwestern's defense shut down No. 14 Minnesota, as the Wildcats defeated the Golden Gophers 55-48 in an upset on Wednesday at Welsh-Ryan Arena in Evanston. Northwestern (12-8) held Minnesota (15-4) to 34 percent shooting from the field. Trevor Mbakwe was a bright spot for the Golden Gophers in the loss with 14 points, 16 rebounds, and 6-of-7 shooting from the field. Jared Swopshire sparked the Wildcats, as he scored 16 points, yanked down eight rebounds, and went 6-of-9 from the field in the win. Northwestern, which shot just 17-of-32 from the charity stripe (53 percent), also got double-digit efforts from Tre Demps (10 points) and Reggie Hearn (13 points).

HALFTIME: No. 14 Minnesota has the lead at the break, 27-24, as well as the rebounding edge, which the Golden Gophers dominated by a 28-15 margin. Tre Demps hits a buzzer-beater out of a timeout to end the half and make it a three-point game. Northwestern has neutralized Andre Hollins (14.3 ppg), Minnesota's leading scorer, limiting him to three points. Jared Swopshire led the way for the Wildcats in the first half, with 10 points. Minnesota's Trevor Mbakwe already has seven points and eight rebounds.